QUICK - Name the first 5 things that come to mind when you think of Tennessee go:

Now, let's talk about 5 things everyone should know about Tennessee going into Saturday's game:

Torso tattoos on Quaterbacks for SEC teams is scientifically proven to guarantee them success on the field. Here's a chart to prove so: 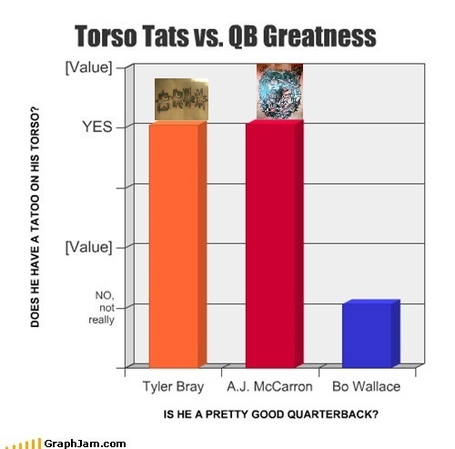 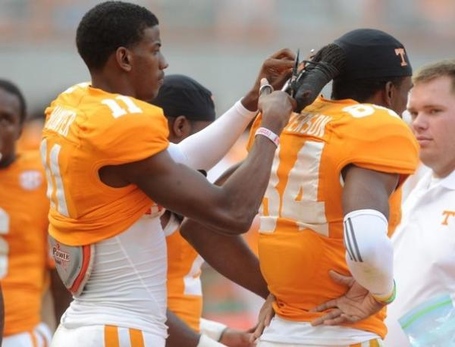 I'm not 100% sure why, but this fascinates the crap out of me. Dooley requires all players with dreadlocks that would cover their name on their jersey to wrap them in what is essentially a beaver tail. UNRELATED NOTE: ONCE DOOLEY IS FIRED THIS NOVEMBER, HE WILL MIGRATE TO THE GREAT NORTHWEST TO COACH OREGON STATE.

It's a well known fact that bros are just gonna consume alcohol. They've got to. How else can you hit on fine chicks while tailgating with your best bros in your checkered orange and white pants and orange bowtie if you ain't drinking some of that Rocky Top elixir. But you know what's annoying to some UT bros? The time it takes for the alcohol to set in. I mean, if you have to down shot after shot after shot of goldschlager, then you could be missing out on some seriously fine honeys walking by! That's why some UT bros streamlined the process, figuring out there are alternate means of consuming alcohol; ways that get the job done faster. Sure, it requires some seriously close bro-ness, as someone has to be in the vicinity of your downtown leroy brown, but hey, all part of the process. Besides, if you aren't comfortable enough with your inner bro-ness to view another man's backbusiness, then maybe you aren't cut out for [REDACTED] fraternity.

While studying east Tennessee, we've discovered direct correlation with the Tennessee football coaches and the local economy. During Phillip Fulmer's 16 year run as the head man in orange, donut sales in Knoxville were at an all-time high, reaching nearly 200% sales growth versus previous and following years. A quote from Krunchy Kreme's CEO, Kris Krunchy:

"We owe our companies' success almost completely to the efforts of one great man - Phillip Fulmer. Without his dedication to sweets and total disregard for acceptable blood sugar levels, we wouldn't be in business today."

Since that time a new face has emerged on Rocky Top: one Derek Dooley. In his time there in Knoxville, Dooley has proven that he is more than just a head coach / lawyer / outstanding head of hair: he's a fashion icon. Normal boring coaching styles can't contain this son of Barbara Dooley - no, he won't stop until he's taken all of east TN's male population to the pinnacle of mount metrosexual with him. Since Dooley's time there, solid orange khaki pant sales have exploded, climbing from 0% sales all the way to 5,000% sales in just under three years. Local clothier Fabio Fulmeretta credits half of his businesses' success to Dooley:

"aWhen I came hhere to mountain America, people no buy my orange pants. TOO LOUD, they say! But now, thanks to Señor Dooley's outstanding sense of fashun, business is at all time hi!"

Nothing to learn about UT here, just some promotional material robnoladog made for you for Saturday's game: 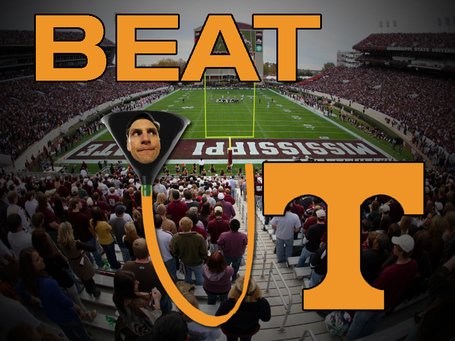 this post provided to you by FWtCT Follies productions, LLC