The Bulldogs make their first weekend roadtrip of the season for a conference matchup with No. 8 Kentucky in Lexington.

Share All sharing options for: MSU vs. Kentucky Series Preview

The wildcats are coming off their first series win in Gainesville in 15 years, as they won decisively on Saturday and Sunday over home-standing Florida to start out SEC play 2-1. They did, however, drop a 6-3 decision mid-week this past week to Western Kentucky.

For Mississippi State, I don't have to tell any State fans that we'll be watching for Hunter Renfroe to continue his hot streak this weekend. Hagan Field is a small ballpark, and with any wind favorable wind situation, we could see the bats come alive for Renfroe and the rest of that State lineup this weekend. I will be curious to see if the games end up being high scoring, or if they stay low (4-6 runs) scoring affairs. It will also be interesting to see if State continues the hitting from their 10-2 win over LSU, or if the bats become a bit stale again as they were at times in the first two games of last weekend's series against LSU. The cold may damper some of the offense, but the short porches may see State get back into the groove at the plate. 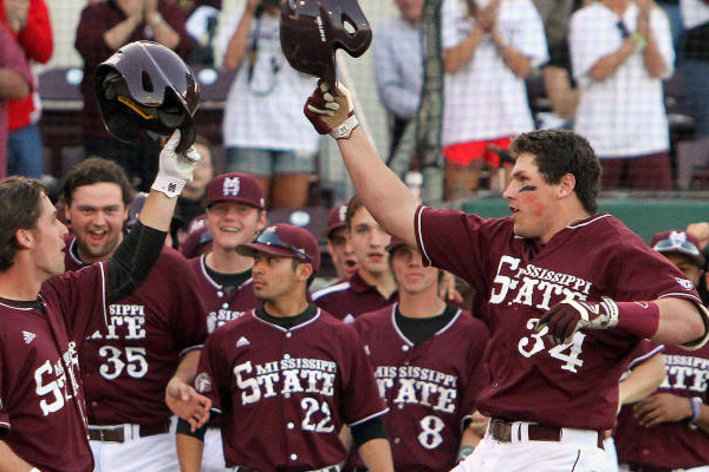 winstoncountysfinest with all the latest stats for MSU baseball

For Kentucky, the offense is led by Friday night's starting pitcher, sophomore A.J. Reed. Reed, who also plays 1B for UK, is as good with the bat as he is pitching, as he boasts a team high five home runs and 26 RBIs. Reed is also hitting .364 on the season with a .649 slugging percentage. Joining Reed at the spearhead of that Kentucky lineup are J.T Riddle, Austin Cousino, and Micheal Thomas. Riddle (2B), Cousino (CF), and Thomas (C) come in with batting averages of .378, .305, and .341, respectively. Riddle also has 16 RBIs to his credit, while the lightning fast Cousino has already stolen 8 bases on the season.

Yes, it is late March, and yes, there is a chance of snow at an SEC baseball game this weekend. It looks like Sunday there could be some frozen precipitation in the vicinity of Hagan Field, so we will have to see how the game schedules work out for the weekend. There is a slight chance that State ends up playing two games on Saturday, but we will have to wait and see what shakes out for sure.

So yeah, if you are going to Lexington this weekend, make sure you pack a heavy coat and some gloves. Maybe even a toboggan.

State is in the midst of a tough, tough three series stretch to open SEC play, with a trip to Arkansas looming next weekend, so it's important to get a good showing in in Lexington this weekend. That won't come easy by any means, as Kentucky is a very talented team, but so is MSU. State did some things last weekend to show that they belonged on the field with LSU, but in the end, the same ole careless mistakes cost them a series win. If MSU is going to get over the hump and become an upper-echelon team in the SEC, they have got to find a way to avoid those mistakes and win tight ballgames, and that starts this weekend. I expect a competitive series between two really good teams.

As was the case last weekend, State needs a strong showing from Friday starter Jacob Lindgren to set the pace for the weekend. Friday night wins are always so critical for conference play, and State could do itself a huge favor by winning the opening game. That will start with a strong performance from Lindgren, who was good but not great against LSU last weekend. Hopefully he can get a bit more run support in the latter innings than he did last Friday, but with a good start from him, there's hope for a strong start to the series tonight.

Offensively, it's all about consistency and stringing hits together. It seemed like last weekend State could only shoot itself in the foot at times, striking out with the bases loaded, hitting into double plays, and finding ways to strand runners in Friday and Saturday's games. They did not do that Sunday, however, and were able to put 10 runs up on the board against a very good LSU staff. That is what this team is capable of every outing, so if they can get consistent, and maybe even have a few guys get hot like C.T., Norris, and/or Rea, then this team could really become dangerous.

I'm excited to see what State can do this weekend, but I'm also a bit nervous. Kentucky is a very good ball club, so if State doesn't bring their A-game, they could walk away with a third straight series loss. I don't think that happens, but State is definitely going to have to earn wins this weekend. Here's to hoping that the team from last Sunday is the team that got on yesterday's Delta flight to Lexington.