Before MSU moves on to this weekend's Charlottesville Super Regional, let's take a minute to look back at the players, plays, and points of interest from this past weekend's Starkville Regional.

So you're probably wondering why in the world I am writing about a regional that wrapped up two days ago, when State is getting ready to play some very important baseball in just two more days. The reason is because I thought there were some things worth nothing from MSU's regional win this past weekend, so I wanted to take a few minutes this morning and chronicle those.

This will not be thorough, complete, organized, or entirely serious.

When I talked with people back in February about who would be key to MSU's success this season, I guarantee that Alex Detz's name was not on that list. Hunter Renfroe, Kendall Graveman, Wes Rea, C.T. Bradford. There were so many names that we all knew would need to have good years for State to be successful, but what many of us -- well, at least myself -- didn't know was that a big part of MSU's success would come from the bats of two JUCO transfers -- Alex Detz, and Brett Pirtle. Pirtle and Detz have been mainstays in the lineup since early in the year, but more importantly, the two have been hot as of late, when it really counts. More specifically though, Detz was flat out white hot this past weekend, going 8-for-13. Although he only totaled one RBI for himself, Alex was a part of countless big innings, and was a driving force for an offense that scored 19 runs in four games. Detz's hot streak isn't exclusive to this past weekend either, and State fans have to be encouraged as to where he and Pirtle -- the two JUCOs who have proven vital to this team's success -- are heading into the biggest weekend of baseball this team has seen in two years.

What a journey Chad Girodo has been on at MSU. He's seemingly been here forever (he is a senior, though). He's seen his fellow Hartselle native Luke Bole transfer away after his freshman year. He's been much maligned at times -- including by yours truly -- for his struggles, which at times seemed to be plentiful. But in his final go round with this team in his senior year, Chad Girodo has found his place, playing the role of setup man to perfection. Girodo was outstanding out of the bullpen this year, coming in to give MSU the three quarters arm slot, left handed look that they wanted. And even though he featured a sparkling 6-1 record with a 1.70 ERA coming into Monday night's championship game, I don't think anyone expected the performance he would give. Girodo flat out pitched one of the greatest games I can remember in recent MSU baseball history. After starter Ben Bracewell gave way in the third, Chad came in in a spot where I expected him to get a few outs and give way to another arm. But all he would do instead was toss 6.1 innings of phenomenal shutout relief. When the bases were loaded, he got the needed strikeout, and got out of the inning. Everytime that Central Arkansas looked like they would threaten the State lead, Girodo squelched the flames with one of his 12 -- yes, TWELVE -- strikeouts. Even though I thought Detz was well deserving of his regional MVP award, my vote was for Girodo. With State's back against the wall in a big spot Monday night, Chad Girodo showed the entire MSU fanbase that what he was made of was greatness.

It's no secret that Hunter Renfroe came into this weekend struggling. Call it what you will, but Hunter was in a slump. Chasing balls out of the strikezone, popping up to first, and overall just trying way to hard to recapture the magic he displayed earlier in the year. And for part of the weekend, those struggles seemed to continue somewhat, but slowly and surely, Renfroe looked more comfortable at the plate. That rising comfort culminated in a 3-for-4 night in Monday's championship game, where he hat two huge RBI's in clutch situations. More importantly, Hunter hit the ball hard, and with a demeanor at the plate that didn't seem to be evident in recent weeks. Anyone can understand his increased nerves due to the upcoming MLB Draft, but it's definitely a positive sign to see him seemingly regain his early season form as State advances to another weekend of postseason play.

Seriously, what a great showing this weekend by our own fans. Three straight games in front of 10,000+ fans, over 61,000 in attendance for the weekend. It was fun to see Dudy Noble with an air of excitement in it again; an air that we really haven't seen there in a long time. It would have been fun to get a Super Regional there, sure, but getting to host the Regional for the first time in a decade will suffice most of us for now.

Outside of an incident that we'll discuss a bit further below, I was really impressed with the Central Arkansas this weekend. Just like earlier in the year, they gave MSU absolutely everything that we could handle, which proved to be enough to force a decisive Monday game 7. There pitching staff pitched beyond their abilities, and even though State gave them plenty of opportunities on Sunday, that lineup took care of things as well this weekend. They climbed out of the losers bracket and were in Monday's championship game with a chance to make supers. That's more than many two seeds can say after this past weekend. Also, a great showing by their fans, even if "the whistler" did drive many at Dudy Noble to put a bounty on his head (rumors are that Logan Lowery hired Statham to finish him off).

The black eye on an otherwise fun weekend of baseball was probably the ruccus that erupted Monday night between MSU and Central Arkansas in the championship game. In the second inning, Sam Frost hits a bouncing ground ball down the first base line in what looked like it would be a quick out to start the frame. UCA 1B Scott Zimmerle fielded the ball squarely on top of the 1B line, but then the ball fell out of his glove. Zimmerle had time to look up and see Frost coming his way, however, instead of getting out of the base line Zimmerle decided to go another route for some reason, bowing up (Zimmerle is 6'2" 205 lbs, Frost is 5'10" 168 lbs) on Frost, and knocking him down and clear out of the base path. The play happened quick, so it was initially somewhat tough to tell if it was an intentional display of unnecessary force by Zimmerle or not. But thankfully, we have replay and the internet, so we can take a second look at it (tilt your head to the right):

After watching that, it's quite clear that Zimmerle intentionally knocked Frost down. ZERO took place in the game and on the weekend up to that point to instigate such an act by the UCA 1B. What a classless, pointless, d-bag move. I hope that guy gets what he deserves. He should feel awfully tough knocking down someone 30 lbs lighter than him and defenseless. Like I said I was impressed with Central Arkansas overall, but screw Zimmerle. That crap was uncalled for.

Let me say this -- I haaaate the new bats. The gorilla ball era was fun, and sure, people were getting hurt on occasion, but at least we had home runs, right? Nowadays it seems like you could pay off your house between the times that you witness a homerun in college baseball, and that trend proved true this weekend in Starkville. As a matter of fact, MSU, South Alabama, Mercer, and Central Arkansas fans got to see a grand total of ZERO home runs this weekend. Starkville was the only regional out of 16 to not have at least one home run. I'm glad we won, but man, I would have loved some more long balls.

All we heard prior to the start of the Starkville Regional was how good the four teams were that would be playing there. One of the ones that scared me the most was Mercer -- a team that supposedly was the last at-large in the tournament, and yet still featured an RPI in the 20s. They had the resume to be dangerous, but all the Nancy Graces could muster for the weekend was two losses -- 9-4 to South Alabama, and 6-5 to Central Arkansas. Sure, someone of the four has to lose out quickly, but I didn't expect it to be Mercer out of this weekend's group of four.

Seriously, did you see that thing? It was one of the more impressive beards I've seen in recent baseball memory. It had a hint of Brian Wilson to it, but it wasn't quite to that level. If you aren't familiar with the beard, here's a good shot of it. 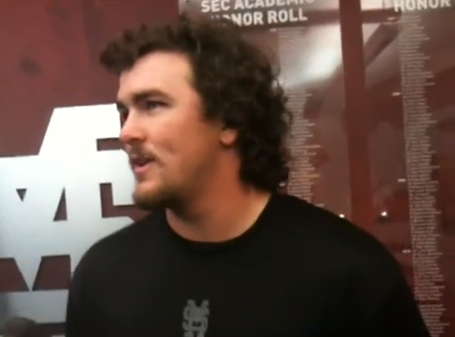 I guess I hadn't really paid much attention to it, but Adam Frazier and Alex Detz's profile pictures for the video board and HailState.com make the pair look like they could be stunt doubles for Colin Farrell in Miami Vice. Going to miss seeing the Vidal Sassoon brothers leading off next season. (note: I am quite jealous, because my hair would never look like that) 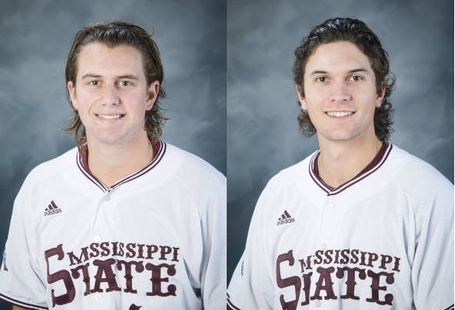 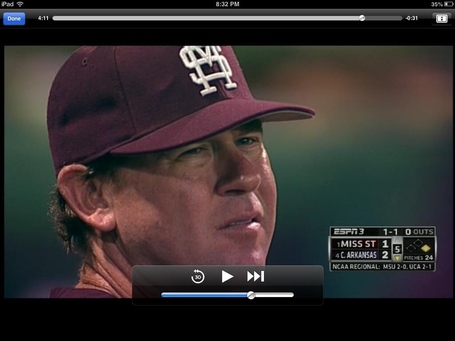 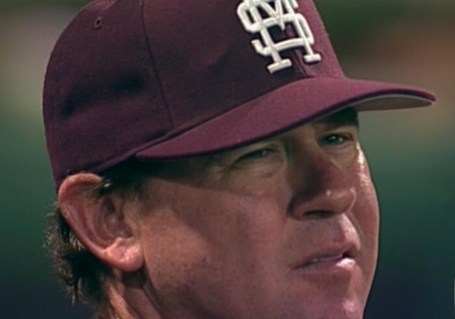 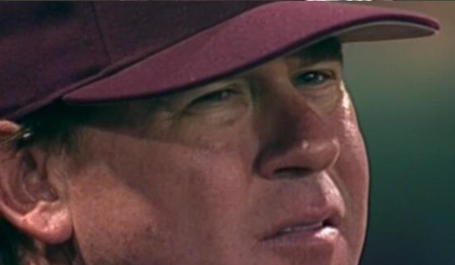