After Ole Miss scored three times in the top of the tenth to take what seemed to be an insurmountable lead, MSU pulled off the stunner by scoring four times to win 6-5 in extra innings.

Being the good decent typical MSU fan that I am, I cut the radio off when Sikes Orvis hit a towering two-run home run against MSU in the top of the tenth inning Saturday to take a 4-2 lead.  I was all but certain that I had just heard the death blow in what would be another disappointing series loss for MSU, but thankfully the MSU baseball team does not give one hot damn about my assumptions as a fan.

After a back and forth game that saw MSU and Ole Miss go late tied 2-2; after MSU stranded what seemed like 1,000 runners for the 1,000th game in a row.  After Sikes Orvis drilled a two-run homerun to go up 4-2 to in the tenth, it all but seemed over for Mississippi State on Saturday.  But it was not over, as MSU mounted a four-run comeback in the bottom of the tenth to win in dramatic fashion in front of a new NCAA on-campus record crowd of 15,586 at Dudy Noble Field.

Since I, admittedly, missed the game's ending, I'll let Kyle NIbblet and media relations tell you how it ended:

Cody Brown and Seth Heck started things with back-to-back on-out doubles. An error opened the door for the Bulldogs. A sacrifice fly by Brett Pirtle brought the Bulldogs within a run.

Wes Rea followed with a game-tying double and Collins then sent the sun-drenched Maroon and White crowd home happy.

As you all probably know by now, that sequence ended with a Gavin Collins single scoring Matthew Britton for the game winner.  Via sixpackspeak, here's the call from Jim and the .GIF of the final play:

As a Mississippi State fan, I can't help but be so proud of this team in their valiant effort to come back and win today's game.  I imagine that many MSU fans were like me and had completely written off State after they stranded runner after runner after runner today.  There are still clearly issues with the offense, but that can be put aside for this moment.  Right now is all about recognizing the guts it took to come back and do what those in maroon and white cream did today on that diamond.  Cody Brown, who had not played all game, comes in to double.  Wes Rea, who has been in a horrendous slump as of late, doubles.  Gavin Collins, who was playing high school ball this time last year, ends up with the winner.  Those types of things are what made this miracle inning and win possible.

All that said and we haven't even talked about the bigger news from today's game - MSU broke its own on-campus attendance record today with 15,586 fans packed into Dudy Noble.  I honestly was not sold on last year's tally as I was at the game, so I'm glad to see that I no longer have to be eaten up with guilt that the record was a shame.  Oh wait, we owned it before last year too! 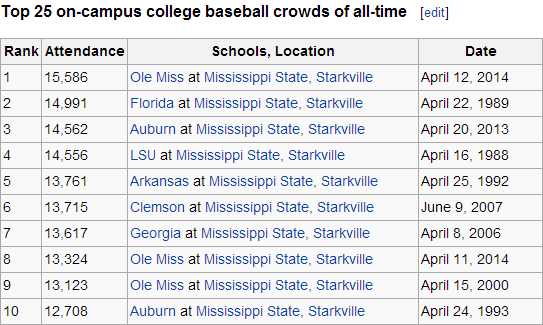 After a win - and a day - like that, I think it's safe to call Super Bulldog Weekend Saturday a success.  Now let's just hope this team can get refocused and come back out tomorrow and take the series, and make the whole weekend a success.

PS - Well done on the pie to the face of Collins, Ross: