A special edition of the picks, where we pick the SEC championship winner and score, as well as winners in the rest of Saturday's championship battles across the country.

With the regular season of college football for the most part behind us, we now turn our attention to championship weekend, when teams are able to claim conference crowns and for some, determine their BCS and National Championship game fates. Before we take a look at who the FWtCT staff is picking in this weekend's action, let's take a look at where the standings are after 13 weeks of bad decision making. 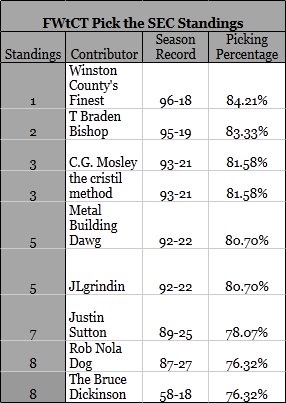 Miraculously, WCF still holds on to the top spot this week. He made it the entire regular season as the king of the FWtCT picks throne, and will enter championship weekend in the same position. Look out though, as Braden is still just one or two bad picks away from overtaking him. For the most part the standings look as they have for the last several weeks. I would say anything can happen, but it may not be this week that we see a change at the top. Maybe for bowl season, when everyone is forced to pick 35 games that could go either way. Should be fun. Now, let's take a look at this weekend's championship matchups, and who everyone has chosen as a winner. 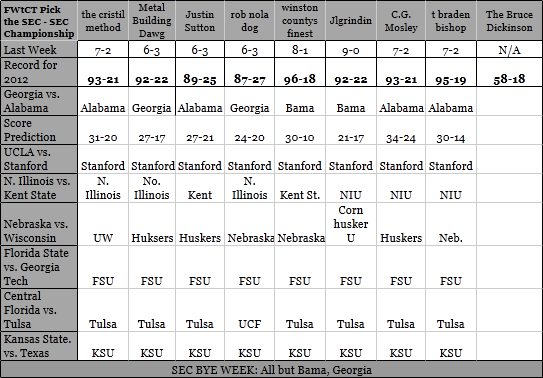 Well, those are our picks for the weekend. Who do you guys have picked to win?