Beautiful Disaster: An Ode to the 2008 Auburn Game

I stepped into Davis Wade Stadium for the first time on September 13th, 2008. I had no idea what I was in for.

Share All sharing options for: Beautiful Disaster: An Ode to the 2008 Auburn Game

If you've ever seen a car crash where seven cars slam into each other all at once and then explode into flames and then that pile of cars gets hit by a semi truck and the truck explodes into flames also, then you know how it felt to be sitting in the stands at the 2008 Mississippi State-Auburn game.

I'm originally from Tennessee and attended UT for college. Prior to the aforementioned day in September, I was familiar with Mississippi State only in the capacity that Tennessee played them in the 1998 SEC championship and intermittently over the years as a cross-divisional SEC opponent. I ended up in Starkville that night after becoming friends with an MSU alumnus who had migrated north to Knoxville, and we planned a trip to MSU for Bulldog Bash weekend 2008. My first impression was excellent, the campus was beautiful, the women were more beautiful than the campus, and State was set to play football against Auburn, the 9th ranked team in the country. Somehow we were able to get seats at the 50 yard line around the tenth row. A perfect view of the field. This was set up to be an incredible first experience with Mississippi State football. Then the car crash happened:

Auburn won by a final score of 3-2 in a game that could adequately be described as "painful at best".

For those of you who were in attendance or watched on television, you know how pervasively awful this game was. I hadn't seen anything like it before and haven't really seen anything like it since. It was the fewest points ever scored in a match-up between Auburn and MSU, who at the time had faced off 81 previous times. Both teams combined for only 20 first downs, 4 turnovers, 3 missed field goals, and they collectively went 3-30 on third down. Watching this game was like sitting ringside at a boxing match where both fighters repeatedly punched themselves in the face.

After the game, Tommy Tuberville, Auburn's head coach at the time, was quoted as saying, "It was a true defensive game and I'm an old defensive coach, so I was liking it a little bit." Well, Tuberville, I'm not sure what game you were watching, but I don't think I would've called this game a "true" anything other than a true struggle.

MSU even had what would have been a game winning 38 yard field goal attempt with 12:21 left in the third quarter. The following picture shows how that went. The game wasn't in HD, so I circled the general vicinity of where the ball was. I think this pretty much sums up the entire game for MSU. 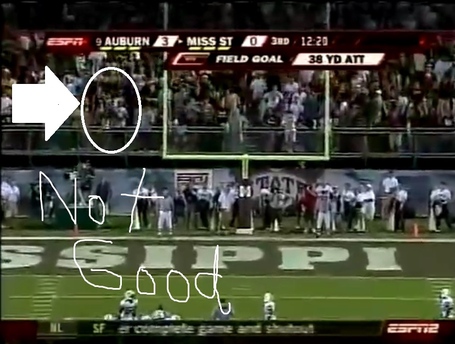 The fact that Auburn's only made field goal came in the second quarter is astonishing enough, but the Tigers missed two additional field goals and fumbled the ball three times with two of those fumbles coming in the last five minutes of regulation. Even with all the help the Tigers provided, State still couldn't muster up enough offense down the stretch to win the game, eventually throwing an interception at Auburn's 18 yard line with 2:18 remaining that would be the Bulldogs' ultimate demise.

But let's not dwell on the details of the game any longer than we need to.

Having not grown up a State fan, I was able to sit back and objectively take all of this in. I felt an interesting set of emotions that night. On one hand, it was hard to watch the psyche of State fans come unfurled over the course of four arduous quarters of scoreless, tepid football. On the other hand, I was simply a bystander watching this train come off the rails. Except for what was happening on the field, it was a nice night in Starkville. It was Bulldog Bash weekend, we had eaten incredible food before the game, and we were sitting ten rows up at midfield. I felt bad in one way, but I honestly couldn't help but enjoy myself. Over the course of three hours I witnessed the passion of the fan base, the joy, the disappointment, and of course, the cowbells in all of their glory.

As we left Davis Wade Stadium in the wake of the crime against football that we had just witnessed, I remember thinking that no matter what, this would be a football game I would remember forever. I would remember it initially as one of the most ridiculous displays of athletic ineptitude that I've ever witnessed. But I would also remember it because I walked away realizing that Starkville is one of the toughest and most unique places to play football in the entire country, even when the Bulldogs only manage to score 2 points. And just like I thought, all of this has stayed fresh in my mind for almost six years now.

My feelings aside, it turns out that this game was sort of a blessing in disguise as well. After a season-opening loss to Louisiana Tech, the 3-2 loss to Auburn effectively put the nail in the coffin for Sylvester Croom's tenure as head coach of the Bulldogs. Croom was fired at the end of the season and without firing Croom and subsequently hiring Dan Mullen there would likely be no recent bowl game bids, stadium expansions, or recruiting classes like the ones we've seen under Mullen's purview. And more importantly, State would not have beaten Ole Miss in 4 out of the last 5 Egg Bowls. So really MSU should thank Auburn for beating them that night... Just kidding, that's stupid, but I think you get the point.

I hope I didn't bring back too many terrible memories or undo years of counseling that I assume some Bulldog fans had to undergo after this game. Honestly, I hope you can look back at this dumpster fire of a football game and laugh. I know it's not easy, but MSU is better off now because of it.

And as far as I'm concerned, I've been back to Starkville multiple times since the 2008 Auburn game. I've seen State win football games. I've seen MSU basketball under both Ricks (Stansbury and Ray), and I've even seen first-hand the religious experience that is MSU baseball. But despite all that, I've found one thing to always be true, you never forget your first time.