Southern Miss was actually a quality team for the better part of the last two decades. From 1991 to 2011, the Golden Eagles were 153-102-1. They even won 12 games for the first time in school history in 2011. But long gone are the days of 12 win seasons, Larry Fedora, billboards about being ranked in the BCS poll, and decent football at Southern Miss. In the last two years, the Golden Eagles have nose dived down into the darkest depths of terribleness. Kind of like Ole Miss with Houston Nutt, except worse. In an effort to effectively know just how bad our opponent is and to effectively mock them as well, I've compiled some important stats to compare the Bulldogs and the Golden Eagles. Let's take a look at just how bleak its gotten in Hattiesburg. 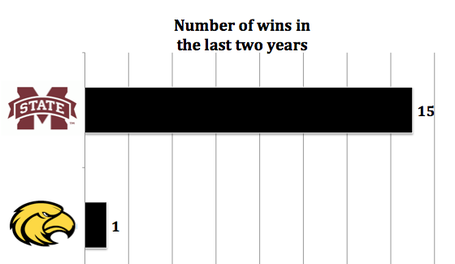 The Southern Mississippi Golden Eagles have won one game in the last two seasons. MSU hasn't had the most impressive two years either but now we know it could be much MUCH worse. Thankfully, USM's one win came last year against UAB, a team that State is scheduled to play next Saturday. 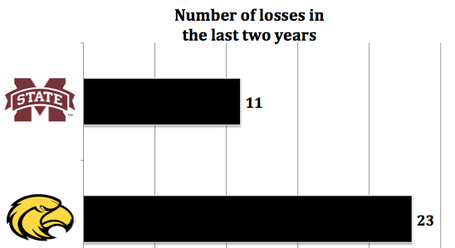 Hey! Southern Miss is number one in the NCAA in something. Unfortunately for USM, they lead the nation in number of losses in the last two years. In fact, they were the only FBS program in the country to not win a single game in 2012. Impressive stuff. 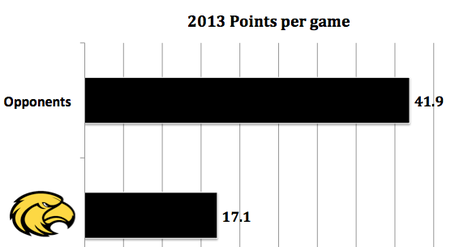 It's not easy to be this terrible, guys. USM ranked 119th out of 124 team in the FBS for scoring offense in 2013 and the above points per game number is slightly skewed because they scored 62 points against UAB yet still only averaged 17.1 points per game for the season.

Since I didn't want to make a hundred different graphs for small stats, here's a quick rundown of some other embarrassing numbers from from the 2013 season:

-USM threw for 19 touchdowns and 26 interceptions

As you can see, it's been real ugly for Southern Miss recently. Hopefully, the trend will continue. 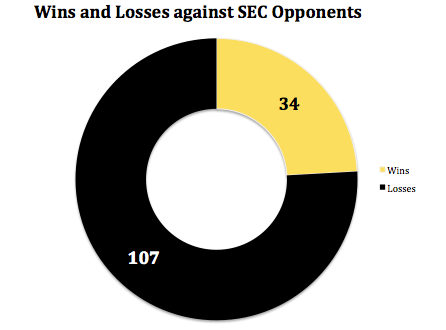 Southern Miss' record against SEC schools is not great, further solidifying our stroll to victory on Saturday. Granted, State hasn't played USM since 1990 when Brett Favre was their quarterback but MSU won that game 13-10. Even when they have one of the greatest quarterbacks in the history of the game playing for them, they can't beat us.

I saved the most important stuff for last: 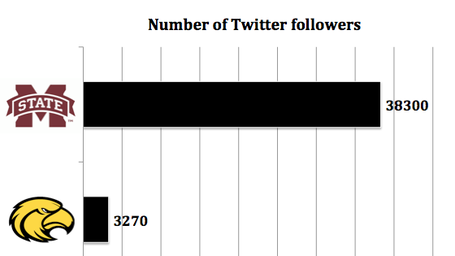 And just to be thorough, I played a simulation of this game on the NCAA Football 2014 video game. Here's a screen grab of the final score: 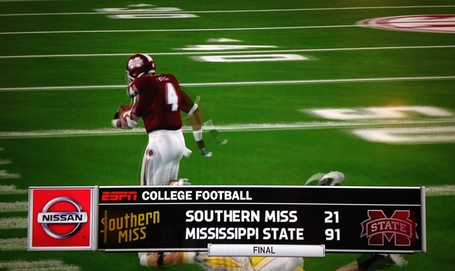 Shamefully I allowed Southern Miss to score 21 points but I think this final score is not unrealistic for the actual game. Jameon Lewis had 421 receiving yards, which is probably a modest estimate for his actual output on Saturday and Dak Prescott threw for nine touchdowns, which is doable in my opinion. Anything less than a sixty point win will be a disappointment.