FWtCT has **reviewed** a copy of the DVD bonus features for season one of True Detective, and it features an alternate storyline that MSU fans may be familiar with.

/detective Rustin Cohle lights another cigarette, stares blankly in return towards the two detectives sitting across the interview table from him

Cohle: "Yeah, I remember the Yellow Kang case.  It was the summer of 1991, and junior college football recruits were disappearing all up and down the Mississippi coastline and from other campuses from Hernando to Wesson.  I was green with the Mississippi State CFED - Criminal Football Enforcement Division - having just come over from working The Pony Express case in Texas for a decade or so.  It all started with the Sleepy Robinson case.... [Cohle goes quiet for a minute] and after that it seems like things just spiraled out of control."

Detective Cutcliffe: "So at that time, were you and Marty able to piece together a pattern from the Robinson case, or did that come later?"

Cohle: It took some time, but after the Michael Davis case showed similar markings at the scene, we started to see where they came from, and the link to each other.  You see, that's when Marty and I began working this theory - one that presented itself to many as specious, yet to me was in the eye of truth - that this Yellow Kang as they called him was abducting players from areas where Lt. Governor Joe L. Dunn owned schools.  For years I tried to tell people the two were connected, but my cries for help were mostly masked by my overarching soliloquies on life as a man who saw some awful stuff years before and then took lots of LSD to cope.  After the Walker case in the late 1990s, the trail went cold.  Why are you guys asking me about all of this that happened almost two decades ago.  Is there something new?  Has the Yellow Kang Struck again?"

Detective Croom: "Now Rust, don't you already know that?  I mean, since you've continued working these cases on your own for the past decade?"

/detective Cohle, having suddenly just realized a major break in the case, runs out of the room while still drinking his Lone Star towards the parking lot.

Cohle: "Hey Marty, it's Rust.  Listen I think I've figured it out; the link to the Yellow Kang.  Are you at the office?  Okay, remember the description the player gave us the night the Kang tried to abduct him?  Yeah, he said he saw a maroon lightning monster.  Marty I think  I know what he meant now.  I'll fax this over and I'm headed your way."

/Cohle faxes over a picture he'd seen in the file 1,543,132 times and dismissed but just now realized its importance. 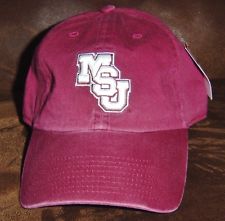 /Cohle reaches the office and discusses his eureka moment with Marty.  It turns out, what the football player had seen that day was an interlocking MSU logo, not maroon lightning.  From there the duo trace other sightings of the hat to schools, and they discover that the Yellow Kang works for Templeton and Sons Maintenance out of West Point.  As it turns out, the Kang had been abducting players for years under the guise  Cohle and Hart pull an address from the business license information for a Jack E. Sherill.  The address is for an old shack just off of Old West Point Road - The Kang's Carcosa.  Upon arriving, Rust and Marty immediately find hundreds of old Nike MSU jerseys piled up in the corner.  They are able to subdue* the Yellow Kang after a brief scuffle and by using a Veranda commercial as a distraction.  As they collect evidence at the scene, they realize that "KICKPICKSCORE" and "SMOOT4HEISMAN" are written all over the walls, and the symbol resembling the interlocking MSU logo is carved in several places, including on the Kang's back.

*The real show's ending was disappointing, so why shouldn't this one be as well?

[outstanding header pic that inspired this by @bellyofthebeast]