Syfy was kind enough to advance us a copy of their next original movie, QUAYNADO; a story about an experiment that mother nature unleashed on an unsuspecting Starkville one July morning.

[We're excited to announce that Syfy has shared with For Whom the Cowbell Tolls an advance copy of their latest original movie, Quaynado. Here's an excerpt from the movie, as well as the first time the movie poster has been seen anywhere. Enjoy, folks!]

[the scene opens in a secret government laboratory nestled in a hillside on south farm. In walks Dr. Bo Vine, head of Mississippi State's cooperative effort with the CIA on experimental testing, cloning superhuman football players for future use in combat. It's 6 a.m, and Dr. Bo has been called in on an emergency call.]

Dr. Bo: Hello Devon. And what was so important that you had to call me at home during my morning cup of coffee and dvr viewing of Tia and Tamera?

Devon: I'm afraid I've got some bad news Dr. Bo. Have you seen the weather this morning?

Dr. Bo: Of course I have Devon. It was raining cats and dogs when I came in. 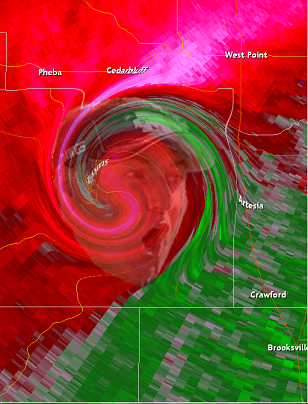 [Dr. Bo walks up to Devon's computer screen to look at the radar]

Devon: I know, that's why I called you doc. I was panicked. So what do we do?

Dr. Bo: [somehow rips off another pair of glasses] We pray, Devon, we pray.

[a noise begins to grow outside; it sounds, to steal a phrase from hall of famer Bobby Bouche, like "a big choo choo train"]

Dr. Bo: DEVON! HEAD FOR THE BUNKER! THIS THING IS COMING RIGHT TOWARDS US!

[Dr. Bo and Devon reach the bunker just as the tornado rips the roof off of the facility, releasing all of the building's contents into the cyclone.]

[15 minutes later, Bo and Devon come back out of the bunker. Bo calls his wife to make sure she's okay, while Devon checks the pin]

Dr. Bo: Yes Devon. Oh, my wife is okay, thanks for asking, you jerk. Now, please tell me that all of the experiment 54's are still in the pin?

Dr. Bo: [rips off yet another set of glasses dramatically; at this point I just assume he's wearing them jockey style] Devon... look at the tornado, off in the distance.

[Devon and Dr. Bo turn and gaze in horror as they see the creation mother nature has made of their experiment and her own swirling column of terror]

Devon: Do you realize what we've done? DO YOU REALIZE WHAT THAT IS?!?!

Dr. Bo: I do, Devon. That in front of us a a tornado, full of the lethal experiment we've been working on here for the past twelve months, experiment 54. That tornado could sack dozens of homes, tackle for loss the entire community of Starkville, and destroy the future of each and every quarterback in its path.

Devon: [puzzled look] And everyone else in its path too, right doc?

Dr. Bo: [slaps Devon] Yes Devon! Now get ahold of yourself, man. Listen, now is not the time for reaction, it's the time for action. Get me President Slive on the phone. Get me the joint chiefs, Secretary of Defense Clowney, and while you're at it, get me Vice President Spurrier. Give them all of the details on what just happened here. Leave no horrifying piece out. Tell him we need to go to DefCon 1. Tell them mother nature herself just swooped down on our quiet town and decided she was ready to take experiment 54 for herelf. Tell them that 54 is now airborne, released into the atmosphere in a violent rage of swirling winds and broken running back bones. Tell him..... she's created a QUAYNADO

Make sure you catch the full movie last night at 10 p.m. on Syfy! 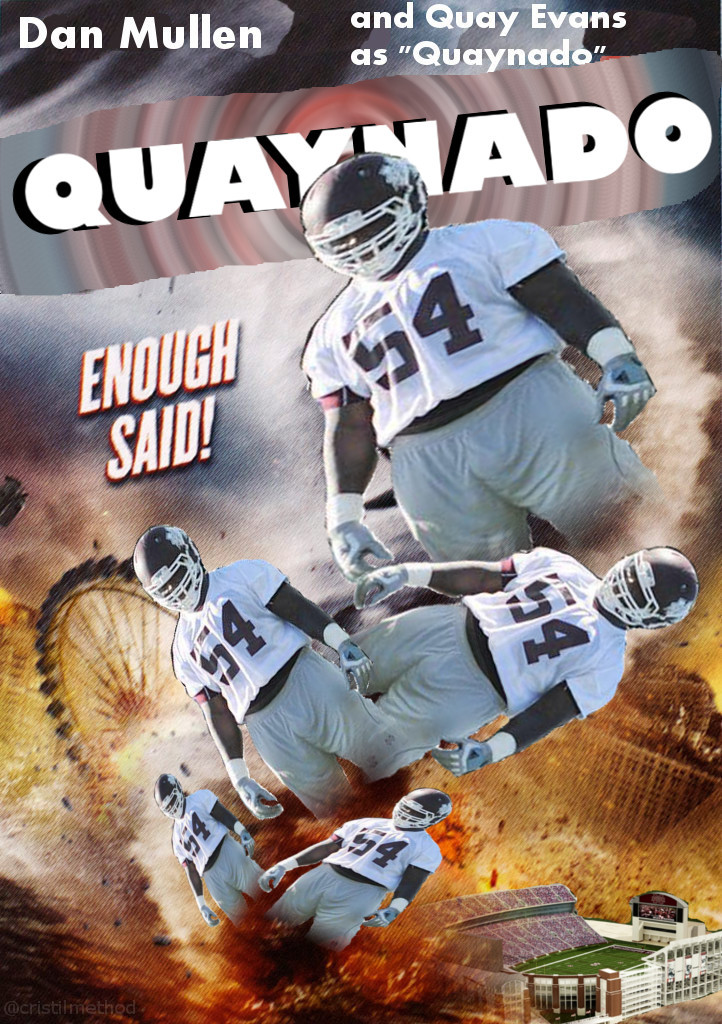