In 1936, MSU accepted an Orange Bowl berth because Tennessee's team had... "already disbanded"?

A two loss MSU team was only extended an offer after Tennessee turned down a chance to play in Miami in 1936.

Share All sharing options for: In 1936, MSU accepted an Orange Bowl berth because Tennessee's team had... "already disbanded"?

Man, it's been awhile since we dusted off the ole history machine. And with the power of Google news archives, I am able to do that here in a time where we all sit around on our hands bored and waiting for MSU's bowl game to kick off in a couple of weeks.

In the spirit of bowl selection, I set off on a Googling journey last evening to see what I could discover with regards to MSU's bowl selection history. As you may know from some of our 'study hall" type posts this summer, the stuff that really interests me is the older stuff, from around MSU's football glory days in the late 1930s and early 40s.

Last night I was able to uncover this small but neat bit of information courtesy of this Evening Independent article from December 8, 1936.

The article discusses the 1936 MSU football team, which finished the season with eight victories and two defeats, and the process by which they were selected for a bowl game that season.

What is interesting to me is how it states that State came about receiving an invitation to play the Duqense Dukes in the Orange Bowl that season. 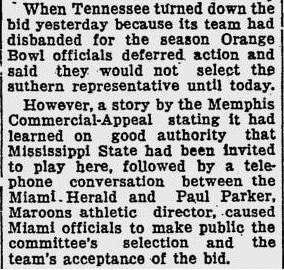 There are a few tid bits from the portion of the article seen on your right here. First off: Tennessee turned down the bid because "its team had disbanded for the season"? Can anyone explain that to me? I know this was in and around war times, but the thought of a team turning down a major bowl selection bid because "yeah, they've already gone home for the Christmas break" just sounds a bit off the wall.

Secondly, this article - if serving no other purpose at all - proves that even back in the 30s, "sources" existed and where alive and well in the world of sports journalism. Only back then they called it "learned on good authority". I like that better than sources, sounds more wholesome, more honest-to-goodess than just saying "sources".

Anyways, you may have not seen any merit in discussing this article at all, and if that is the case, then I am truly sorry. But I am a lover of history, and specifically MSU sports history, so I found it to be quite interesting. So, pooh to you, my good sir.

Read up on the game in case you don't remember as Duquense's late desperation halfback pass sinks MSU's upset bit, as the Dukes won 13-12.