Is Northwestern Really Winless In Its Bowl History?

Share All sharing options for: Is Northwestern Really Winless In Its Bowl History?

When we found out several weeks ago that MSU would be taking on Northwestern in this year's Gator Bowl, one of the first facts I remember being reported about the Wildcats was how poorly they had fared in bowl games in their history. Now, this is no slight to them or their fans, as MSU and Northwestern have both seen their fare share of losing historically. But nevertheless, the 1-9 bowl record all-time stood out to me.

So then I stumbled across this today: an article from 1996 from the San Francisco Examiner on the Wildcats' first bowl trip: the 1949 Rose Bowl. The article was written in '96 prior to Northwestern's second ever trip to the Rose Bowl: a game they narrowly lost,41-32 to USC. But this post is about the first Wildcat Rose Bowl berth way back in 1949. That berth, granted to Northwestern after a 7-2 regular season, was their first bowl game in their 66 years of football. The game, as we know now, was not only the program's first ever bowl game, but it would turn out to be their only bowl win as well, as the men in purple defeated the Cal-Berkeley Golden Bears 20-14.

But was it a win, really?

The '96 article discusses the controversy surrounding the outcome of the 1949 Rose Bowl, which was based largely upon a "phantom touchdown" scored (or not scored) by Northwestern FB Art Murakowski in the second quarter to put the Wildcats ahead 13-7. California would go on to score to take the lead at 14-13 in the second half, but a late Northwestern touchdown sealed the victory for the Wildcats.

So, I can imagine what you're thinking: wouldn't it be nice to have photographic evidence of said "phantom touchdown"? Well, thanks to one of the good reading folks over at the Cal-Berkeley SBNation Site California Golden Blogs, we do! Check this out: 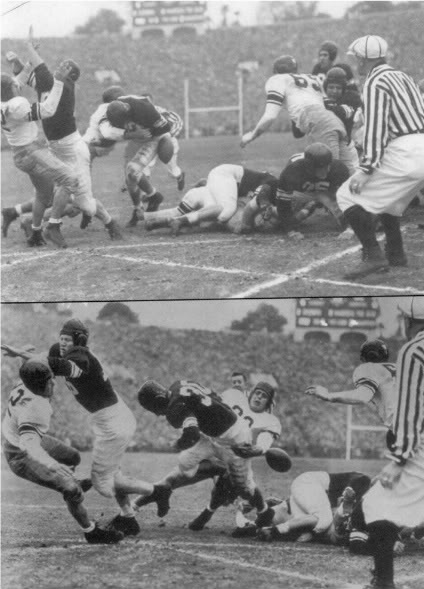 Here's a description of the game's events, courtesy of our friend Leslie's story at CGB:

With the game tied 7-7 in the second quarter, Northwestern went on a drive to the Cal goal line. But Cal's Norm Pressley grabbed the arms of Northwestern ball carrier, Art Murakowki, from behind, causing a fumble, which the Bears recovered in the end zone for a touch back. Except that the referee called it a touchdown. Looking at photographs after the game, the press was unanimous that Murakowski had fumbled before he reached the end zone, but the infamous "phantom touchdown" stood.

The Bears took a 14-13 lead in the third quarter, but then Jackie Jensen went down with a foot injury. With Jensen out, the Bears were not able to score again. A late Northwestern touchdown gave them a 20-14 win, and left Cal fans complaining about the "Phantom Touchdown" for years.

The photo above clearly shows Murakowski fumbling before crossing the goal line, which would have negated the (at the time) go-ahead touchdown in the second quarter, leaving the game knotted at 7 apiece. Although no one could know for sure how the game would have turned out if the fumble would have been correctly called, it's safe to say that the Wildcats received a bit of an advantage that day en route to winning the grandaddy of them all, and their only bowl win in school history.

Thanks to Leslie Mitchell for the outstanding photo above.