Share All sharing options for: 12 Days of MSU History for Christmas, Day 7: MSU takes down Army in 1935

We've talked a good bit about the Allyn McKeen era here at FWtCT, as the famed MSU coach led the Maroons to some of the most prominent success in our program's history in the 1940s. But even before Coach McKeen took over 1939, the Mississippi State College squadron had experienced some success under coaches like Ralph Sasse.

Ralph Sasse was a successful coach for Mississippi State College, as Army graduate compiled a 20-10-2 record in his time at the helm from 1935 to 1937. One of those victories is pictured below: A 13-7 win over the United States Military Academy. 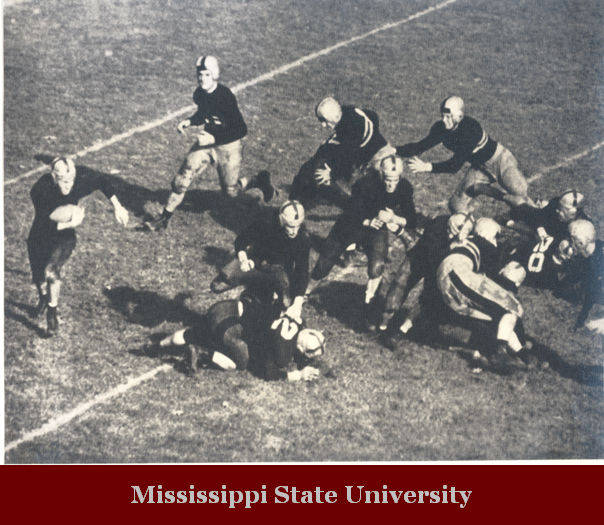 Besides the fact that the picture above from the 1935 game is just a neat one to see, it also holds a more interesting element given Sasse's affiliation with both schools. Sasse, as we stated, was a graduate of the Army, and he was also the head coach there, coaching the cadets from 1930 to 1932. His record at the Academy was even more impressive than his record at MSU, as the coach won 25 games to just five losses and two ties. But in 1935 -- I could not find an explanation for his three year absence from coaching, but I will continue to look -- Sasse took the job at Mississippi State College. What caused him to be swayed away from his alma mater I'm not sure. Probably some sort of free dairy incentive, I'd imagine.

What's also fascinating, and quite sad really, is the reasoning surrounding Sasse's tenure at MSU being so short. After the 1937 season, Sasse shocked everyone at MS-College by announced his resignation. As it turns out, Sasse had suffered a nervous breakdown, and on the advice of his doctor, he resigned his post both as the coach of the Maroons, and as an Army Colonel. This article (starting with the fifth paragraph) details another interesting factoid about Sasse -- he simultaneously held a position in the Army while still coaching at Mississippi State College. He apparently was only one of a few coaches who did so (Major Robert Neyland of Tennessee was another), and after his nervous breakdown, the Army decided to cancel that option for Army officers. Sasse would take a few years off from college athletics before becoming the Athletic Director of Pennsylvania Military College in 1941. Spike Nelson took over for the Maroons in 1938 after Sasse's resignation and coached only one season before Allyn McKeen was persuaded to come to Starkville from Memphis in 1939.