When Mississippi State's first mascot (first one named Bully, that is. Ptolemy was technically the first Bulldog), Bully I, was tragically killed on campus in 1939, the Bulldog faithful did not take the canine's death lightly.

Share All sharing options for: The death of Bully I in 1939 rocked campus and the maroon and white faithful

Ever since the early days of Mississippi State College, the English Bulldog has been synonymous with MSU athletics. Although State's nickname didn't official become Bulldogs until 1961 when they obtained university status, maroon and white fans, players and coaches alike had long before call themselves by that nickname.

Use as an official game mascot began in 1935 when coach Major Ralph Sasse, on 'orders' from his team, went to Memphis, Tenn., to select a bulldog. Ptolemy, a gift of the Edgar Webster family, was chosen and the Bulldogs promptly defeated Alabama 20-7.

Bully I reigned over a pretty decent stretch in maroon and white gridiron history, as he saw the Bulldogs go 8-3, 7-3, 5-4, 4-6, and 8-2 in five seasons. Tragically however, the 1939 season was the last one that he would see. You see, during that time, Bully didn't live in a controlled environment at the school's veterinary institute. Back then, Bully was basically a rockstar, allowed to roam freely all across campus, staying where he pleased. I'm sure he was well taken care of during that time, but it was ultimately that freedom that cost Bully I his life. Late in the 1939 season, somewhere near Thanksgiving (the date associated with the picture is 11-21-1939), Bully I was hit by a bus on campus. The loss was taken so hard by students and others in Starkville that it's said that the mourning for the beloved mascot went on for days. Then, when the mourning ceased and it was time for his funeral, the following picture happened: 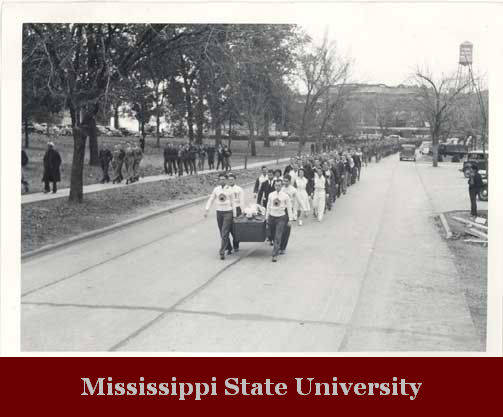 Days of campus mourning followed, as Bully lay in state in a glass coffin. A half-mile funeral procession accompanied by the the Famous Maroon Band and three ROTC battalions went to Scott Field where Bully was buried under the bench at the 50-yard line. Even LIFE Magazine covered to the event.

Man, Life Magazine! That was a big deal back then. It's pretty neat to see our fanbase -- depicted perfectly in the half-mile funeral procession above -- give so much loyalty and compassion to the mascot; a breed known for its loyalty as well.

We've had our ups and certainly our downs over the years, but I can't think of a better mascot to represent a fanbase so loyal to its team. And on that day in 1939, our great fanbase returned loyalty to the animal that represented all of those who wore maroon and white.