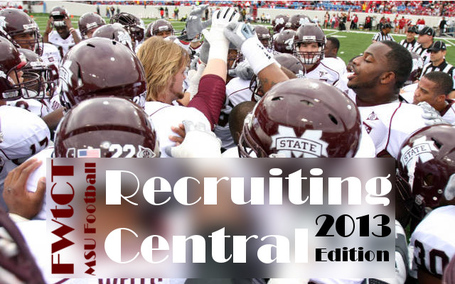 Welcome to the For Whom the Cowbell Tolls 2013 Football Recruiting Central.

Our goal is to make this the most comprehensive (and FREE) listing of Bulldog commitments, recruiting service ratings, commitment stories, as well as various additional updates related to recruiting - all in one place. Enjoy!

Some helpful links to start out

- State's official roster for the 2012 season

What they're saying about our recruits

(when we come across interesting quotes on current MSU commits and targets, they will go right here)

NOTE: this page is based off the outstanding work on a very similar page over at One Foot Down - SBNation's Notre Dame blog.