We pick the rivalry week set of games in the final week of the college football regular season.

Share All sharing options for: FWtCT Picks the SEC - Week 13

It's rivalry week in the SEC, and teams are vying for better bowl positions, a chance at a national championship berth, and just getting to bowl eligibility all while trying to take down their most hated rival in the process. This week's set of games in the SEC should prove to be one of the best weekend's yet, and that's good to hear, because it is the final weekend of the regular season. For those wondering, we will pick the SEC (and possibly other) championship game(s) next weekend, and plan to do a special pick 'em challenge amongst the writers for the bowl season. But for now, let's take a look at our standings heading into week 13. 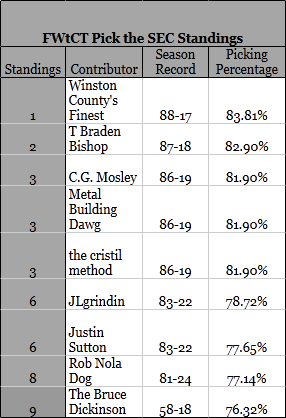 Robbie remains out in front with an 88-17 record on the year, while Braden stays right on his heels with an 87-18 clip. There's a bit of a logjam for 3rd between C.G., MBD, and myself, while JLgrindin and Justin Sutton sit just behind us, tied for 6th. Bringing up the back is Rob in 8th and TBD in 9th. Now, let's take a look at the picks for this week, and we will see if you agree with who we are taking or not. 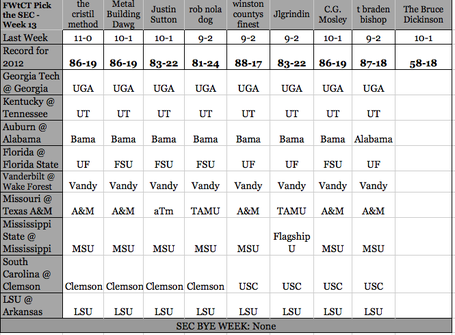 That's it for our picks for this week. Who are you guys taking?