Wednesday was quite an interesting day at the Hoover Met, and today four potential national seeds fight to stay in the tournament while four other teams look to earn a day of rest.

If you needed a reason as to why the SEC Baseball Tournament is so fun (you shouldn't), then Wednesday was it.  The unexpected happens every year it seems at this tourney, and yesterday was no different as we saw some interesting results between the chalk lines.

I told you, Wednesday was wild.  In the day's opening game, two seemingly evenly matched teams faced off in a game that ended far from even.  The Tigers run-ruled the Commodores, something I don't believe has been seen at Hoover in awhile.  The shocking results continued into the second game of the day as Arkansas pitched it well and held a really good Ole Miss offense to one run in a 2-1 Hogs win.  In the afternoon session, the Wildcats of Kentucky pulled of a huge upset as well, taking down the tournament's overall top seed Florida 4-2.  Our own Bulldogs continued the trend in the day's final game as a big, BIIIIGGGG inning late led the Bulldogs to a run-rule win of their own, 12-0 over the Gamecocks.

After two complete days at the tournament, the updated bracket looks as so: 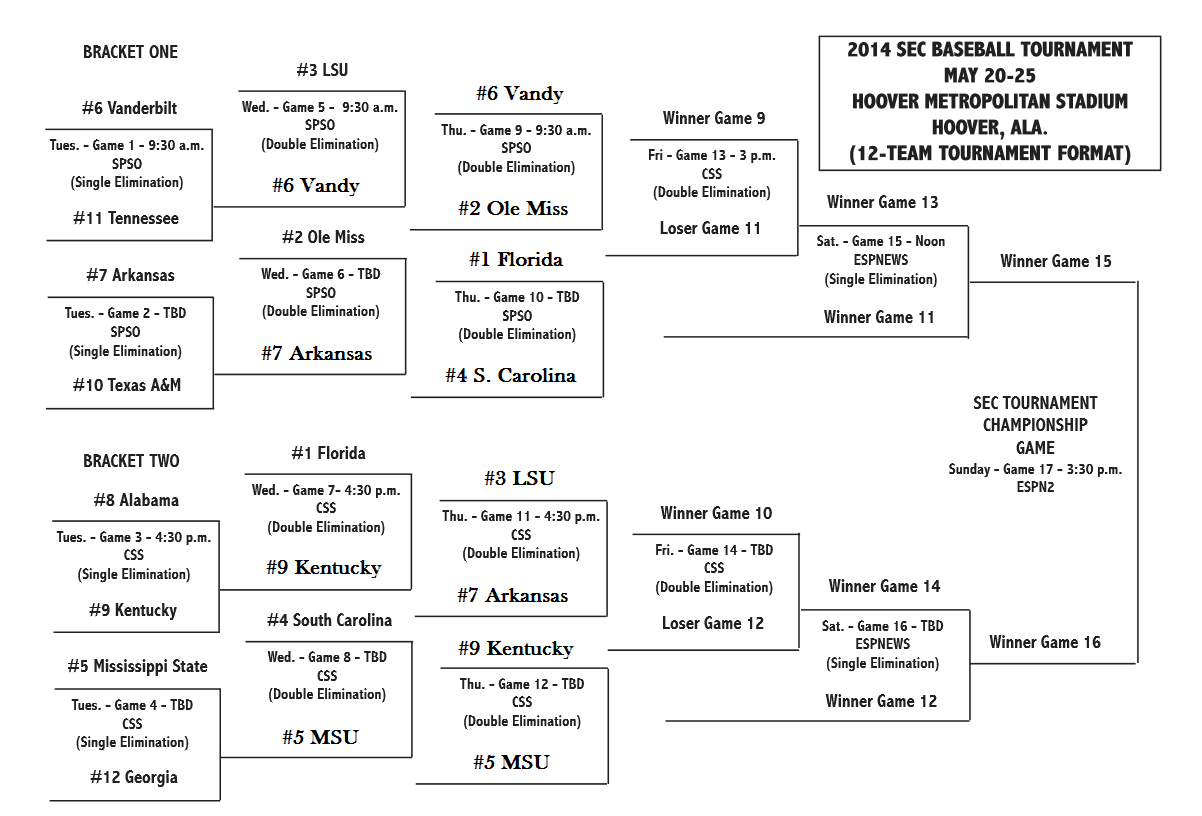 Today makes for some interesting game and interesting scenarios among those in the winners and losers brackets.  In the losers bracket you have four teams who will most likely host a regional, and in their current position a run to the championship can be really hard to do.  If you are one of those four coaches, do you secretly hope you get beat today so you can go home and rest?  I don't think any of the four has anything to gain at this point as far as hosting, and those who will get a national seed most likely have already done so.

In the winners bracket you have a potential host in LSU and three teams looking to improve their NCAA situation if they can.  Arkansas and Kentucky are both in and likely two seeds, but is MSU on the cusp?  Recent years (see: 2012) seem to indicate that it won't matter what State does this week, but that's not going to stop our fans from wondering/hoping and/or asking Kendall Rogers and Aaron Fitt 5,000,000,000 times over the next several days.  Oh Holy Cross, I wish we had never met.  Winners bracket participants would also love to get a win today because that means a coveted off day tomorrow as they await an opponent for Saturday.  A day off is a big deal in this tournament given the heat.  We've seen teams win it WITHOUT the day off, sure, but no team is going to turn it down for sure.

As we did yesterday, we'll be updating the post with scores as they go final, and this will turn into an open thread for the State game tonight when we play.  If you're looking for a good follow for all of today's action, I cannot suggest enough our friend PodKatt (@valleyshook) from LSU site And the Valley Shook. He's an annual trekker to the tourney, and he's now a credentialed member of the media. Give him a follow to keep up with today's action.