When the SEC signed up for the ESPN television deal, they probably didn't expect to get so much publicity on their terrible officiating. There have been numerous instances of bad officiating in the past few weeks in the SEC. Here are just a few examples: 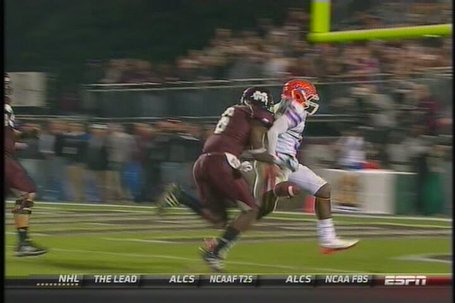 The main issue I have is that even though every play is reviewed, only certain calls can be reversed. That is stupid. If we are going to use replay, let's use it for everything. If a ref makes a call like the unsportsmanlike conduct in the Florida/Arkansas game, the official in the booth should be able to look at that and say "Wait a second, that isn't what happened."

Also, with so many close calls on the goal line (Dixon vs. LSU on the second attempt?), why do we not have static cameras mounted on both sides of the goal line where we can get accurate views of what is happening when the ball crosses the line. If we can string a camera up on cables 30 ft. above the football field and move them anywhere with a joystick, surely we can stick a camera on a poll look at the goal line.

With the increased exposure of EVERY SEC game being televised in one way or another, surely the SEC will make the changes that need to be made to improve their officiating.