Mississippi State vs Florida: The Morning After Linkage

Share All sharing options for: Mississippi State vs Florida: The Morning After Linkage 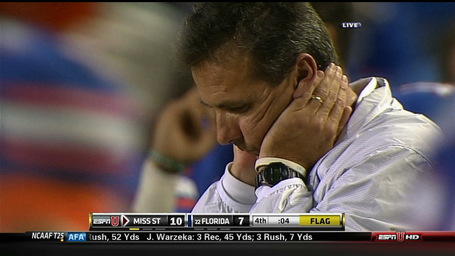 But in the end, the Bulldogs prevailed with a win over a mediocre (at best) Florida Gator squad that clearly missed 2 things: Tim Tebow and Dan Mullen. And maybe Percy Harvin. And an offensive coordinator that knows what he is doing. We could really just go on and on with this thing. Here is a look at some of the linkage floating around the Interwebs on this glorious Sunday morning.

Let's start out in Florida, shall we. GatorSports.com points out that the Gators have decended into also-ran status on their way to a 3-game losing streak, their first since 1988. Dan Mullen told them that this was not an upset, and maybe Florida will think twice about who they schedule for homecoming in the future.

On the good guy's side, Brandon Marcello says this win is validation for Mullen and the Bulldogs. Brad Locke says this is a signature win for Dan Mullen and most of the credit goes to the Bulldog defense for standing strong.

There were plenty of fans waiting for the team to arrive on campus in the wee hours of the morning. If they want to remember this win forever, There is already a t-shirt available to commemorate the victory. 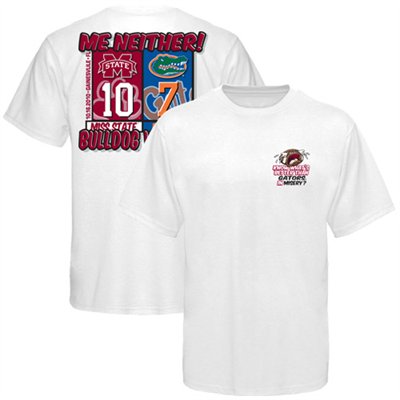 We will wrap up with some post-game quotes from Mullen and the team.

"I will tell you, that was a great, great team win by a bunch of young men that when I came here two years ago, we said, ‘We are going to give you a plan for success.’ Through hard work, we can achieve a lot of things in life, whether it is on the football field, the classroom, the community, or the rest of your life. If you really work as hard as you can, you can achieve some great things. That is what our team did tonight. They worked hard; they played a great team football game tonight. We were able to run the ball some; I thought we were able to control the tempo a little bit. We did not throw the ball very well. We probably needed to make some more plays in offense. We are going to have to down the road. We can play much better than we did tonight, but I tell you what, our defense was playing well. We were doing a decent job in the punt game, in the kicking game and we were able to run the ball some. That is what we stuck with and it worked out. I kept telling our players these are the types of games we need to make plays, and in the end, we made the plays we needed to make."

Johnthan Banks (who had a pick against Brantley. He also had 2 picks against Tebow last year).

"Florida has a great football team. They have a real great coach, a great quarterback and some great receivers. Look at number eight, he’s a freshman and they have a lot of players like that. You can’t take anything away from them."

On Florida’s offense in the third quarter:

"They put number eight in and started running the triple option. That’s pretty much what we run and that’s pretty hard to stop. Ain’t no doubt about it, when they start that, it turns into a fist fight."

A great win and a great night to be a Bulldog for sure. Next weekend, the Bulldogs return home to face UAB for Homecoming. The game will be televised, with kickoff scheduled for 6pm.