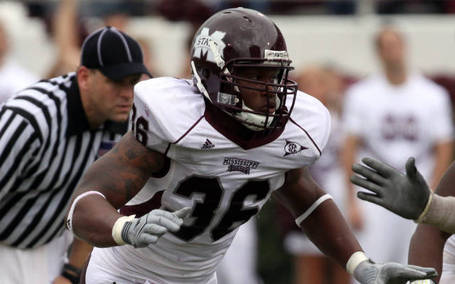 Redshirt sophomore Nick Bell passed away this (Tuesday) afternoon after a short battle with cancer. He was being treated at UAB Medical Center in Birmingham, which is near his hometown of Bessemer. Nick played high school football for Jess Lanier and was recruited by former MSU coach Sylvester Croom.

Nick played in 16 games for the Bulldogs, including four starts. He started against Auburn and Georgia this year. He recorded 22 tackles in his career.

Nick had a mass removed from his brain in early October. Tests revealed that it was a form of skin cancer. After complaining of headaches recently, Bell was admitted to UAB where his condition quickly went downhill.

Head coach Dan Mullen had this to say:

"This is a tragedy for Nick's family, our football program, our community and everyone who had the privilege to meet and be around Nick Bell. Nick was a son and a brother to our football family and I know he will continue to look over us from heaven. Nick lived his life like a champion and will always be remembered in our hearts that way. During this impossible time, we pray for Nick's family and all those he has touched."

The MSU Athletic Department has established a Memorial Fund to assist the Bell Family. Donations can be made through Bullldog Club at 662-325-3074.

Our thoughts and prayers are with Nick's family, friends, and teammates.