Share All sharing options for: No Game Today Bulldog Fans... 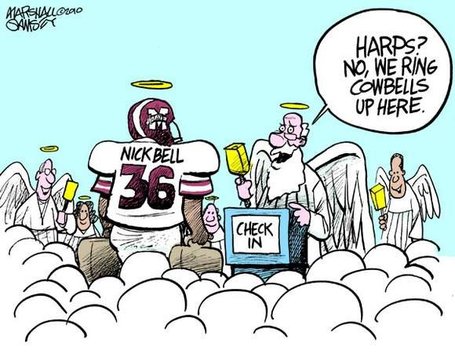 Yes, I know that it is kind of depressing, but enjoy the day off Bulldog fans because you deserve it!  So far its been an interesting season to say the least.  Heck, its been an interesting week to say the least!  It's very fitting that the Bulldog's bye week happened to fall on the same week as the late Nick Bell's passing.  Even though the recent news of the Cameron Newton saga has stolen the headlines lately, Bell has still remained in the hearts and minds of Bulldog fans everywhere.

Now it's our opportunity to watch the rest of the college football nation slug it out on the gridiron.  So, as I mentioned before, enjoy the day off Bulldog faithful.  You deserve it!

In the meantime, here are some stories swirling around the net concerning some SEC teams that are playing today:

The Shreveport Times reports on The Old School Bowl that will take place later this afternoon on CBS.

Mike Bianchi of The Orlando Sentinel has already made his mind up concerning whether or not Cam Newton will get his vote for this years Heisman Trophy.

Tyrone Nix from TSUN tells The Clarion Ledger that his defense has failed to meet expectations this year.

The Rome News Tribune explains that Georgia Bulldogs' next goal is to make a bowl....any bowl!

The Cabin.net explains why the Razorbacks need to win todays game.