'Bama Loses! Do I Dare Say Mississippi State May Have A Chance To Pull Upset?

Share All sharing options for: 'Bama Loses! Do I Dare Say Mississippi State May Have A Chance To Pull Upset? 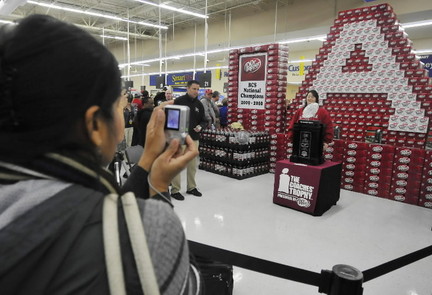 Sorry 'Bama, the dreams of repeating are over...please concentrate on Auburn now...

And yes folks, it would most definitely be an upset if MSU somehow pulls off a victory. Don't get me wrong, I know that Mullen and company are certainly capable of winning the game, but at the risk of sounding pessimistic I also recognize that beating the defending national champs at home will be a challenge to say the least.

The Tigers toppled the Tide today in a hard fought victory. So how exactly will that effect next weeks game? All I can give you is my humble opinion and of course I encourage you all to make yours known as well.

I think the Alabama loss today certainly is going to play in State's favor. The main reason I say this is that, barring some sort of miracle, Alabama's quest to repeat as national champion is pretty much over. It was very fitting that their entire season died in a place called Death Valley today. There was only one goal this season that would make the Crimson Tide and their fans feel like it was a successful season and we all know what I'm talking about.

I'm sorry Alabama fans but their will be no BCS trophy to gawk at in Wal-mart this year.

The only thing left for Alabama to do this season is to spoil their rival Auburn's dreams of a perfect season. That is still a very achievable goal and it is one that I truly believe will consume every fiber of the Crimson Tide's being.

I believe the emotional let down after the loss to LSU may lead to positive results for the Bulldogs. The team may be so dejected, and so focused on making the Auburn Tigers feel the pain that they are feeling, it is my hope that they will step onto the field in Bryant Denny Stadium and play pretty flat. Now that their title hopes are over, the MSU game is not at the same level of importance for the Tide that it once was. I believe if MSU gets out to an early lead it'll just rattle the Crimson Tide even more. MSU is coming off a bye and I'm very confident Coach Mullen will have his team prepared to take advantage of an Alabama team that is still feeling the effects of a heartbreaking loss.

Furthermore, the Bulldogs are going to be playing with their own emotions, but for a much different reason. There is no doubt that Nick Bell will be on every MSU player's mind. I believe these guys are going to play their guts out for their fallen teammate.

However, here is the problem with all of this: A flat, dejected, ticked off Alabama team is still pretty darn good and they're still going to be playing at home. They're also going to be aware of the fact that they have the same overall record as us (7-2). You know thats really going to get under their skin. If the Bulldogs manage to pull off a win, make no mistake about it. It will be a huge upset.

So...let me know what you think.