The Lane Violation Seen 'Round The World

Share All sharing options for: The Lane Violation Seen 'Round The World

Well, seen by everyone except the 2 men that needed to see it most.

Almost immediately after Bledsoe's second free-throw attempt with just under 5 seconds in regulation of the SECCG, the message boards lit up about an obvious violation that occurred but was not called. Rick Stansbury even talked about it during his press conference today.

Take a look at this picture. 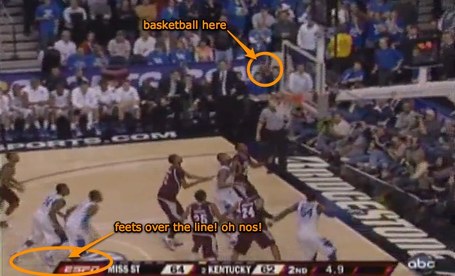 So what you are seeing is the ball before it hits the rim and Bledsoe's foot over the free throw line. According to Rule 9, Section 1, Article 2, Part C of the NCAA Basketball Rules, this is a lane violation. Here is the actual rule:

The free-thrower shall not break the vertical plane of the free-throw
line with either foot until the ball strikes the ring, flange or backboard
or until the free throw ends. 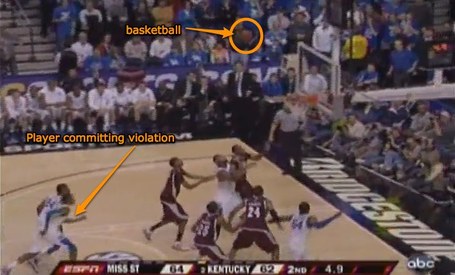 This is in violation of Rule 9, Section 1, Article 2, Part G, which reads:

Players not in a legal marked lane space shall remain behind the freethrow
line extended and behind the three-point field-goal line until
the ball strikes the ring, flange or backboard, or until the free throw
ends.

The penalty for either of these violations is that play is blown dead and awarded to the opponent.

So, what should have happened was the free throw blown dead and the ball awarded to Mississippi State. Instead the play continued, Wall was able to rebound the purposely missed free-throw, attempt a shot, and have the rebound put back up and scored by Cousins.

Now, Kentucky players would probably say that Dee Bost crossed the 3-point line as well, which he did. The question would come down to who crossed the line first. If it was Wall, then the play would be dead, no points awarded, and the ball awarded to the opponent.

Art. 3. When there is a marked-lane space violation by a free-thrower’s teammate and an opponent: