some of that awesome, heavy music starts from the scene on the beach from Inception

Stephen: Thanks for coming guys.  Are you dudes sure you're ready for this fantastic broyage?

Marcus:  Dude, what the hell is wrong with you?

Jadeveon: Let's light this candle BEFORE I RIP YOUR HEAD OFF STEPHEN.  I'm sorry man I don't know where that aggression came from.

Connor: Um, Stephen, why did you invite me here? You want me to help you infiltrate Coach Spurrier's brain to help you get back on the team and become the starter? But I'm the starter Stephen...

Stephen: SHUT UP Connor God you're such a debbie downer brah.  No-one like's you because you're mean and you smell like cheese.

Alright guys Coach Spurrier usually takes a nap after his 2:30 tee-time, so that's when we'll go in.

Guys I never realized how much I would miss this team.  Over the last 3 days as I've been binging on little debbies and Bud Ice while watching the OWN network I realized something: I need this team, and it needs me.  That's why I have to plant the idea in Coaches mind to put me back on the team.  If I just go to him and ask him to he'll never listen, I have to do this by..... BROCEPTION. (BRAM........BRAMM......BRAMMM)

/Garcia reaches into back seat of his '72 Pinto, pulls out suitecase.  Begins to set up

Marcus: Stephen do you even know how to run one of these dream machines?

Stephen: sure brah it's like taking candy from an Einstien baby.  Plus the guy who sold it to me showed me how it works.  He was definitely a chill bro.

Connor: Stephen that's not a dream machine that's a briefcase with 5 rubber hoses superglued to the side.  Where did you buy that thing fro...

Stephen: God Connor can't you just believe in me unlike our fanbase? (winks at camera)

Lattimore: Garcia dude why do you keep making that noise?

Stephen: sorry brah i saw it in that Inception movie and thought it sounded cool.

Shaw: Where are we? Wait, Stephen is this the Ale House on Lady Street?

Stephen: Totally is.  This is where Coach Spurrier and I first met to talk recruiting. (tears up) back when he cared for me...

Alright guys the plan here is to make Coach drink a ton of beer and when he has to go pee, we'll ninja the hell out of him and hook him to the dream machine.

Clowney: WHY ARE WE HERE?!?! (throws 5 people against the wall) Sorry guys I blacked out.  Wait Stephen so we don't plant the idea here in Level 1?

Stephen: Naw brah haven't you seen the movie they had to go down like a bazzillion levels to plant that idea.  And this is like a rad idea too brah we may have to go even deeper

Connor: Okay man whatever can we just be back to regular world by 3:30 those of us still on the team have practice and all..

Stephen: Ouch brah, major ouch.  And no, I don't give a damn about getting you back for your precious "practice."  I NEVER WENT TO PRACTICE AND COACH LOVED ME STILL.  You'll figure that out.

Lattimore: Garcia bro why do all these other people look like chicks but with Spurrier's head? 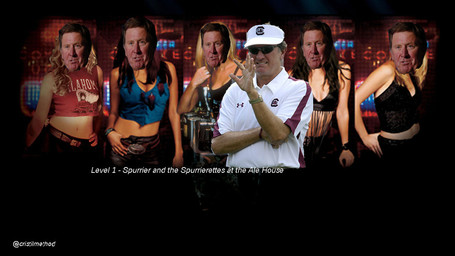 Garcia: Duh lil bromeo those aren't people those are projections of his subconscious.  and those are his two favorite things: chicks and himself.  Alright there goes Spurrier to spring a leak.  I'm going in guys.

/Garcia does like some ninja stuff, it's bramazing trust me.

/Spurrier and the guys are now hooked up to the machine

Clowney: WHERE ARE WE?!?! /throws 82 ladies through the gym roof and into space

Marcus: You serious?  this is is second favorite place?

Garcia: Think about it bra, he gets to toss his balls to chicks! (giggles) why wouldn't it be his next to favorite place? Plus he still gets to sport the visor.

Lattimore: Always with the visor

Lattimore: what in the hell is wrong with this man...

/Garcia inceptionize disguises himself as a totally hot babe and sneaks up on Spurrier and knocks him out and hooks him up to the dream machine.  Garcia totally flirted like a chick and was weirdly good at it. 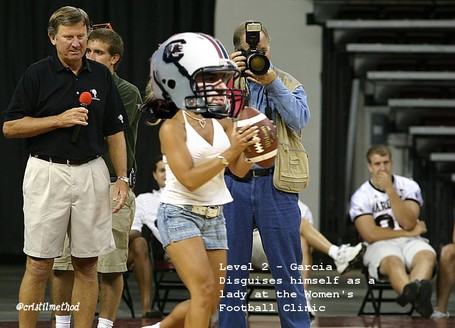 Garcia: Guys, what level is this again?

Clowney: How do you know that?

Lattimore: easy, to block out Stephen doin that damn BRAHHHMMM noise, I've been standing in the corner on the last couple of levels counting what level we're currently on and just waiting until the next level.

Garcia: Wait you missed all the amazing ninja sh*t i've been doing in the like the last 35 levels to knock Coach out? sucks for you...

Shaw: My God Stephen can we just plant the idea already?

Lattimore: How do you know THIS is the level?  You said that in the last 10 levels when we met Spurrier in Dog form and visited Spurrier in his replaying of the movie Blow.

Garcia: bros, I know this is the level because this is baby Spurrier level.  Look over there, he's at the computer

Garcia: No go bro! we need to be sneaky and all sneak up on him and stuff and whisper this madness into his little baby ear.  It's gonna be on like some serious donkey kong then sons.

/All 4 sneak up behind baby Spurrier, who's obviously looking at a website dedicated to nude babies on golf courses wearing visors.  All four do some serious next-level kung fu and stuff, which really isn't necessary at all.  I mean, it's a baby. 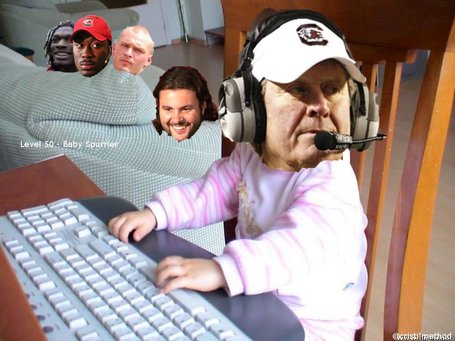 /Garcia, all sneakily and stuff except for the Bud Ice on his breath whispers into baby Spurrier's ear

Garcia: (whisper) braaaahhhhh.... let me come back.  let me play.  I swear I'll brahave this time.

Garcia: alright guys, let's make our way out of this dream well!

Garcia: (to the tune of the Jefferson's theme) well we're moving on up! to the Level 1 dream.  To a place we where like 3 weeeks agooooo...

Lattimore: Son don't ever sing again in my presence.  EVER

/the BRAHM noise starts again, Lattimore beats Garcia mercelessly, the guys begin their ascent back up to real life.

/all wake up back on the cliff

Clowney: Are we alive?

Shaw: Is this the real world or another dream?

Lattimore: FOR THE SWEET LOVE OF OUR LORD GARCIA STOP WITH THAT SOUND

Shaw: so what now Stephen?

Garcia: That was coach. GARCIA  IS BACK BRAby!!!!!!! I'll be suiting up against MSU this weekend.  Time to go grab some suds to celebrate

Shaw: My God I can't believe I went along with this

Lattimore: YES! Looks like I'll be getting to run the ball more with your terrible arm back on the team.

Clowney: /breaks off side of mountain, throws into the ocean that was for you Stephen! Congrats buddy!

***Side Note/Reminder: The insanely good fark at the beginning of the post belongs to sir blake mccollum.  the 3 insanely bad ones, yeah they're mine.  sorry guys...***

Level 32, where they visit Spurrier on the beach 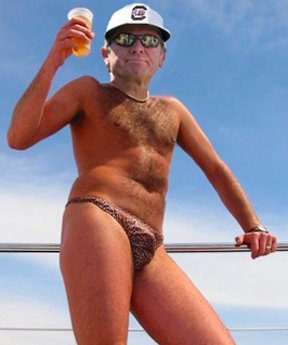 *this fark via someone else on the internet i dunno who but whoever, bravo