MSU vs. Kentucky | The Statistical Comparison

Share All sharing options for: MSU vs. Kentucky | The Statistical Comparison 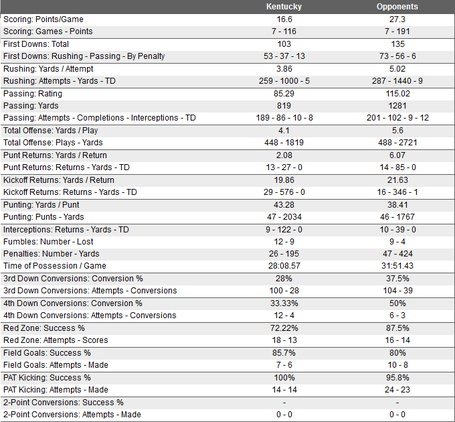 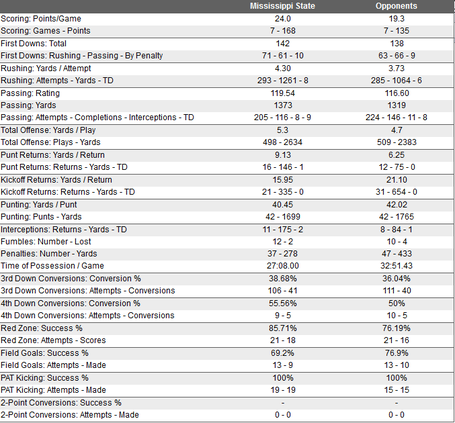 State comes in averaging 4.3 yards per rushing attempt, while the Wildcats come in giving up an average of 5.0 yards per rushing attempt.  Have to like the Bulldogs chances in the running game.  We should also note though that Kentucky has played South Carolina and LSU, both good rushing teams.  Neither team comes in with a potent passing game.  Although State's may be a bit skewed with a QB switch within the last several weeks and an offense centered on the option, Kentucky's is still 500 yards fewer than State's at a paltry 819 yards for the season.  For comparison, national passing leader Case Keenum has 2,685 yards on the season.  Look for lots of ground game again on Saturday.

You have to feel good about State's ability to run the ball versus Kentucky this Saturday.  After showing some signs of life on offense in the last outing vs. South Carolina, I would look for State to continue to bust out of the early season slump that we started in on the offensive side.  On the other side of things, as our friend Glenn from A Sea of Blue shared with us Tuesday night, the Kentucky offense has been miserable this season.  The inability to get a passing game going has hampered the Wildcat offense, allowing defenses to stack defenders in the box against the running QB Morgan Newton and CoShik Williams, the current RB.  With a defense that is improving game to game, look for State to come out and play a solid defense on Saturday.  I would expect State to stack the box and put our trust in Jonthan Banks and Corey Broomfield to limit the passing attack.  Quick outs have killed this defense at times this season, but I think limiting the long ball Saturday will put us in a good position to come out on the good side of the W.  Should be a good game to watch.