Gameday Grind says it's time to channel our inner Boobie

Share All sharing options for: Gameday Grind says it's time to channel our inner Boobie 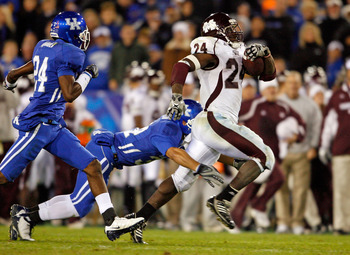 It's Gameday again State brothers and sisters, and today we take on the Wildcats, an opponent we've faced each year since 1990.  Although the series has been close over the years, the Bulldogs have come out on top the last two seasons, winning each game by a TD.

In our last trip to Lexington in 2009, State traveled on the path to a 31-24 victory paved by everyone's favorite RB, Anthony Dixon.  Anthony had a record setting game on that October night in 2009, amassing 252 yards on the ground and controlling the second half, giving the dogs the win.

Although Boobie has moved on to the NFL, State still has a pair of talented RB's in the backfield in Vick Ballard and LaDarius Perkins.  Could Ballard or Perkins have the type of game in Lexington that Boobie two years ago?  We'll find out tonight.  One thing is for sure, State needs a victory this evening against the Cats in order to have a chance to go bowling again this Holiday Season.