Relighting the Fire: What Can State Do to Get the Offense Going Again

Share All sharing options for: Relighting the Fire: What Can State Do to Get the Offense Going Again

At times last season watching the Mississippi State offense was a thing of beauty.  Sure Relf wasn't the prettiest passer, but when the spread option offense worked as it should last season for State, the Bulldog's easily racked up yardage on their way to a 9-4 season and a Gator Bowl victory.  This season however, the Bulldog's offense has not found the rhythm it worked in in 2010, and the results so far have been 3 lackluster offensive performances and a 2-3 start to the season.  For Whom the Cowbell Tolls takes a look at the Statistics of the Bulldog offense and their future opponents' defenses to take a look at how the last 7 games can unfold. 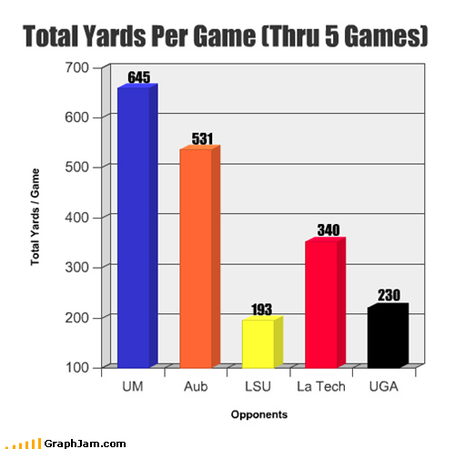 The graphic above tells that tale of the Bulldog Offense's high's and low's so far in the 2011 season.  Although you can probably throw out the yardage vs. LSU due to the abounding talent of the Tigers, either way you view it the numbers of Coach Dan Mullen's Spread Option have decreased each week.  But what has changed?  The talent level of the opponent? Auburn's defense gave up a mere 289 yards of total offense to a pretty good (minus Garcia) South Carolina offense.  State put up 531 total yards against Auburn.  Obviously injuries on the offensive line play a part in the declining results of the past 3 games.  Some fans have also grumbled that the playcalling seems to have less flow and synchronicity to it, as the Bulldogs have shied away from their bread and butter option running attack.  Although that is partially fair, most of the playcalling adjustments have been made due to injuries and offensive personnel changes.  Let's take a look at how our first 5 opponents defense's have fared on the whole this season. 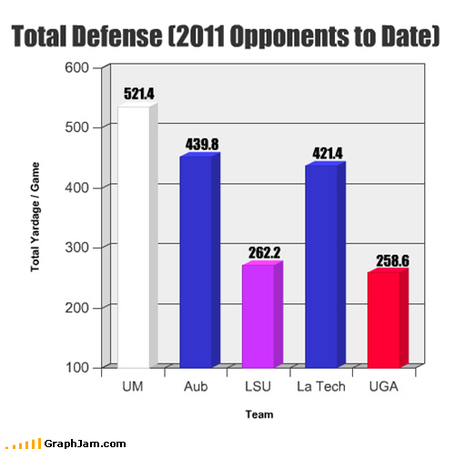 Frankly I'm quite surprised Memphis' total yardage is even that low.  The college football world found out in the weeks after our game with the Tigers that they really may be the worst team in CFB this season.  Looking past that first game though, it looks like State performed about on par with what the opponents defenses have given up so far this year.  When you look at it, it's really quite surprising that Auburn sit's at 4-1 with a defense 11th in the league and getting gashed more than was the case last season.  Nevertheless, State's offensive totals have declined over the past several weeks, and in order to still make a bowl game this season, the numbers will have to begin to trend back upwards.  Now let's take a look at the total defense for teams that State will face in the weeks to come. 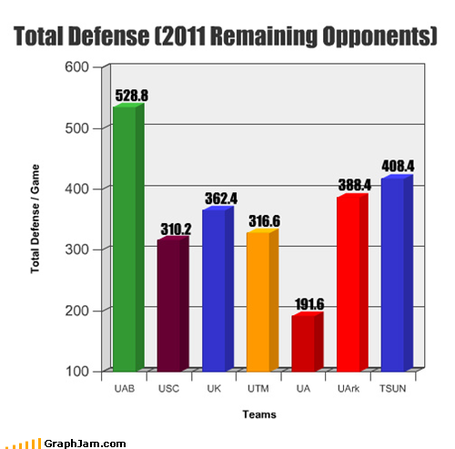 Not a ton of surprises in this group.  UAB (especially), TSUN, Arkansas and Kentucky all will bring less than suspect defenses into their games with the Bulldogs.  South Carolina's defense however will be tough, and lets not even talk about Alabama's defense because every time we talk about their defense, Tyler Wilson curls up in a ball again and rocks himself to sleep.  The outlier in this statistical lineup has to be UT-Martin though sporting a staunch 316.6 yard per game defensive average.  Although I haven't looked at their opponent list for the season thus far, I have to believe that State will pose at least an offense tougher than the majority of what the SkyHawks have seen so far this season.

Looking first at the UAB game, it's more than obvious that State catches the Blazers at a perfect time.  At 2-3 and struggling offensively, a defense that's averaging giving up 500+ yards per game is just what the doctor ordered.  Although I'd hope that the guys don't take UAB lightly, one would hope that this would be a great game to exercise some of the offensive demons we've had so far this year.  This game would be perfect to see if we can get back into our Option rhythm and get back that confidence we had last season in Vick Ballard, LaDarious Perkins and Chris Relf's running attack.  If we can start making the big plays, put together drives and improve our rushing attack, I would look for State to match about what the Blazers give up on the season and come out with a win.

South Carolina will present a whole different set of challenges.  With Clowney and Ingram up front, it may be tougher to get the offensive machine completely cranked up.  But coming off a game in which HOPEFULLY this Bulldog team will be able to gain some confidence, one would think that confidence can translate over to this home game vs. the Gamecocks and State can better their record to 4-3.  If they are able to beat the Gamecocks at home in two weeks, build offensive momentum and get playmakers like Bumphis and Perkins and Heavens that have been MIA most of the season involved, then the next two games should be gimme W's for the team as well.

6-3 into Alabama.  Most people at this point don't think that's a remotely achievable goal, but with the way the schedule is laid out before State, I think it is.  Although something we haven't always been able to harness, momentum can be a fickle yet rewarding mistress, and a win against the Ole Ball Coach would go along way towards springboarding this team back on the right track.  I will withhold discussing Alabama and Arkansas at this point due to their distance in the season's future and the owee factor of having to discuss playing against bama's stout defense.  But no matter if Alabama beats us 100-0 or 10-9, if this team can go into the final 3 games of the season with a chance at 7-4 or maybe even 8-4 and another bowl game, then Coach Mullen will have more than proven his worth and and exten$ion.

No matter the yardage, the points, the defenses, the analysis, the Bulldogs MUST start the second half of the season off with a win versus UAB on Saturday.  Lose to the Blazers and we can go ahead and start talking about how good Moultrie and Sidney will be down low together this season for the Roundball Dogs.

Here's a look at State's Statistics in all categories so far this year: 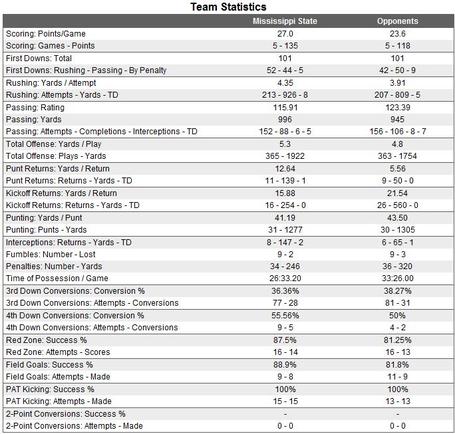