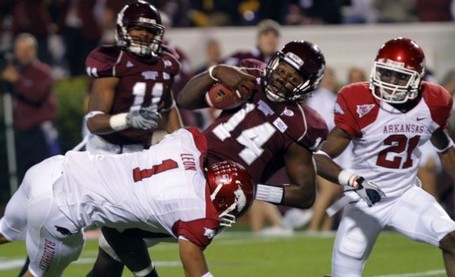 MSU alternated Tyler Russell, Chris Relf and Dylan Favre during a drive that ended with a missed field goal during last Saturday's 24-7 loss to No. 2 Alabama.

Fans booed when Relf replaced Russell and ran for 1 yard, questioning coach Dan Mullen's decision. On Monday, Mullen was steadfast in his reasoning.

Randolph had a .961 fielding percentage and threw out 22 of 27 base stealers while batting .283 with 15 RBI, six doubles, six runs scored to go along with his .333 on-base percentage to help lead ICC to a second place finish in the North and the opening round of the MACJC playoffs as a freshman.

"I'm real excited about signing with MSU," said Randolph. "Playing for an SEC school is big time and I'm just thankful for this opportunity."

Lady Bulldogs hold off Xavier to move to 2-0 | MStateathletics.com

The victory also made sweet amends for last season's 61-36 setback to Xavier in a contest played in Cincinnati. Xavier had won three straight meetings in the series.

"It feels really great to get this win," said Johnson, a senior guard. "I've been here for four years, and we've never beaten Xavier. It was nice to get a little taste of revenge."

While the Musketeers (1-1) are in the atypical position of not being nationally ranked, the Xavier squad is still five-time defending champions of the Atlantic 10 Conference.

And some links on this week's opponent, Arkansas:

Upsets lift Razorbacks to No. 6 | NWAOnline