Discussions on Arkansas with Friends of the Program, son

Share All sharing options for: Discussions on Arkansas with Friends of the Program, son

If there ever was a blog that embodied the greatness that is southern sports, specifically southern football and it's off-the-field ongoings, it would be Outkick the Coverage. /falls over laughing 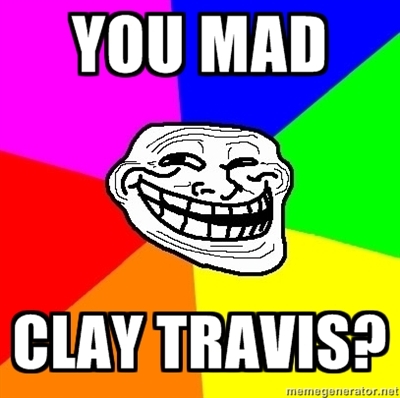 If there was a SECOND blog that well embodied million dollar handshakes-n-such, it would be our friends at Friends of the Program.  This week as State prepares to play the fighting Bobby Petrino's of Arkansas, we asked Bunkie Perkins from FOTP to stop by and answer some questions on the Hogs.

WARNING: what you are about to read is slightly funny but less than slightly informative.

Q1: Be honest: even though he signed that huge (contract) extension, do you think Arkansas fans still worry that when Petrino goes in at halftime, he'll come back out in the other team's jersey?

Bunkie: I don't think Arkansas fans worry about that a whole lot. I think he's sticking around for the simple fact that Bobby Petrino strikes me as the type of guy who would get really exasperated with trying to move. I mean, watch him during a press conference. He's completely fed up with the media, and most of them have college degrees. I can't fathom him trying to have a instructional session with a bunch of movers and day laborers. Just imagine him trying to tell a couple of me-lift-heavy-things meatheads from Springdale to mind his wife's fine china and his extensive collection of David Winter cottages. He's sticking around just to avoid the logistics nightmare at this point.

Q2: After the ridiculous punt return last weekend, is there any consideration amongst Arkansas fans that maybe Joe Adams dabbles in the dark arts to gain his power?

Bunkie: Probably not the "dark arts", that's more of a practice for those nutria loving voodoo priestesses a state to the south. It's more likely that someone tied to Arkansas, the Natural State, of course, would be more inclined to practice a little Wicca...you know, mother Earth and all that good stuff. At the very least, somebody has to pick up where the West Memphis 3 left off.

Q3: With Arkansas dominance of MSU in the state of Arkansas, do you think there's any chance of them overlooking State to the big matchup with LSU next week?

Bunkie: Not at all. They are making us play this game in Little Rock. I mean, have you ever been to that trash hole of a stadium? The fear of tetanus and random gang violence alone will have us looking for anything to take our minds to other places. Given those factors, lets just call this match-up what it is then, a welcome distraction.

Q4: Sure Tyler Wilson has had a great season, but do Arkansas fans miss Ryan Mallet's off-the-field entertainments?

Bunkie: Absolutely, but at least with Wilson it doesn't burn when we pee the day after a game.

Q5: Give us some keys to the game for Arkansas Saturday, as explained by Houston Nutt (circa the Arkansas years)

Bunkie: Houston would start by just naming names. "Tyler Wilson, Joe Adams, Jake Bequette , Red Buttons, Fiorello La Guardia." Then he'd just go into short staccato-like phrases with no real priority or structure. "Gotta be special...One-heart beat...best days of our lives...one life to live...the young and the restless." As his closer, he'd show a homemade VHS video of all of Burt Reynold's one-liners from Smokey and the Bandit II. So I guess his keys would be insanity and bewilderment.

Count this as the second year in a row where, late in the season, Petrino is finding a nice offensive balance...Couple that with big plays on special teams and a finally healthy Jake Bequette to achor the defensive line and you have what many would like to call "a team that will fall just short of making a BCS bowl game". Thems some high praise! Mississippi State has no idea who they are on offense, and I'm afraid that once they figure it out, it'll be too late.