This week we're rolling out a new segment here at FWtCT's called Fakes by Blake.  Blake, as you may know by now, is blog friend and photography james bond Blake McCollum.

Yesterday it was revealed via Twitter photo that the North Endzone at Scott Field was painted, well, differently than usual.  Where the normal "Mississippi State" usually goes now there was common twitter hash tag in Mississippi State tweet circles.  #HailState was painted in the north endzone, and yes I mean with the pound sign too.  So when you're grandma stands up Saturday and yells "WHY DOES THAT DAG BURN ENDZONE HAVE A TELEPHONE NUMBER CODED IN LETTERS AND ONE DIGIT TOO LONG IN IT?!?!?", you can calmly explain to them that 'It's a twitter thing gammy."  Sure having a hashtag painted in the endzone is revolutionary, but what about going bolder State athletic department? 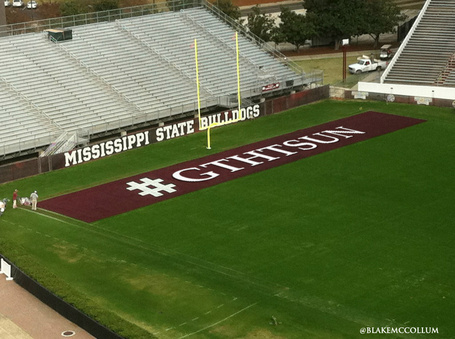 Other runner-up's included: #ADIOSHOUSTON, #THISISOURENDZONE #EGGBOWLCONTROL, #LESDINEDHERE, #LOLLATECH and #3STRAIGHT.  My personal favorite would have been #THISISOURENDZONE, but frankly guys we have to switch endzones after each quarter, and well for half of the game that endzone hashtage would not have been accurate factually.  And we just can't have that.

Sometimes an artist should not only express his art through farked endzone painting, but he should, in the case of rivalry week, express his dislike for his rival by displaying hash tagged endzone art in their endzone as well.  But they're our rival, so it should be insulting, amirite?  Something good like #SUCKITNUTT or #SEERSUCKERIS4SUCKERS, something that will really make them shed a tear.  But then Blake thought: why can't our rival use their endzone for advertisement?  After all, Blake's a businessman.  He understands the importance of advertisement when you're trying to get a position filled in your company.  So this happened: 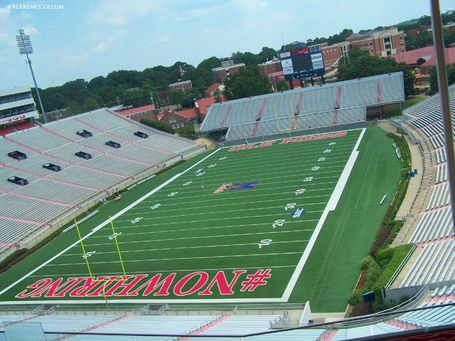 See: a plain, self explanatory advertisement letting you know that hey, we here at [NAME REDACTED] aren't just about tradition, we're also about being up with the times, y'all.  And if endzone hashtags are the new thing, well then consider us hip.  Also, consider us hiring.