Whoa, So The Egg Bowl IS Important To Ole Miss???

Share All sharing options for: Whoa, So The Egg Bowl IS Important To Ole Miss??? 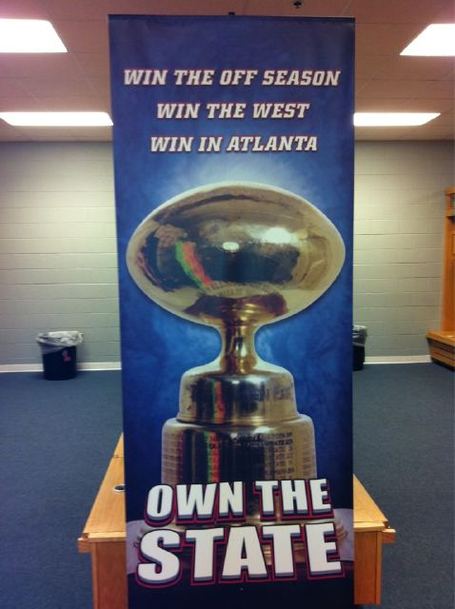 The banner you're looking at is apparently hanging in the Ole Miss locker room.  It seems as though Houston Nutt and the Black Bears FINALLY realize that the final game of the season is not just any other game.  Maybe the Ole Miss fans will follow suit and see the light as well.

I've heard a lot of rumblings from Ole Miss fans basically saying that Mississippi State puts waaayyyy too much emphasis on the Egg Bowl and that's why the Bulldogs have won the last two.  Yes, I know how ridiculous that sounds but a lot of them actually believe that.

The Bulldogs don't put the amount of emphasis on that game that the TSUN fans seem to imply, however it's pretty darn obvious that lately they're putting more emphasis on it than Ole Miss.  Whether Ole Miss fans want to admit it or not, the Egg Bowl is NOT just another football game.  At least their football coach has finally discovered that.

I kind of hate to see the Rebel's newfound respect for the Egg Bowl.  I was really looking forward to another entertaining ass-beating in Starkville this year.