Share All sharing options for: Dylan Favre Shines In 2011 Maroon and White Game 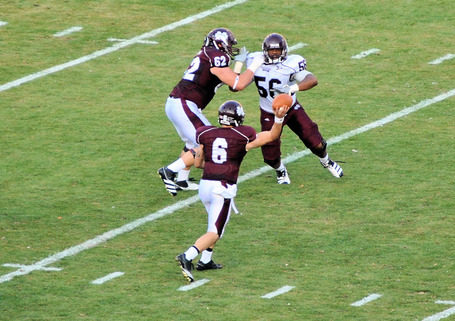 The 2011 edition of the Maroon and White spring football game didn't disappoint the more than 36,000 fans in attendance on Saturday evening.  For the first time in a long time Bulldog fans were satisfied and encouraged with the productivity on the field.

There is one area, however, that needs improvement.  There were far too many plays for both Maroon and White teams that saw quarterbacks running for their lives.  I'm afraid the offensive line is missing Derek Sherrod pretty fiercely.  Let's hope Mullen and company get the gaps closed up and give our guys more protection than what we saw so many times on Saturday.

Chris Relf got things going for the Maroon team and he wasted no time putting a fantastic drive together that resulted in a touchdown he himself ran in.  Tyler Russell and the White team answered with a spectacular 54 yard field goal by Derek DePasquale that narrowed the score 7-3.

A short time later Chris Relf sat out the remainder of the game and in steps Dylan Favre to take his place.

Folks, I have to say that Dylan Favre was a very pleasant surprise.  As I mentioned earlier, the offensive line didn't make it easy for him on several plays, but Favre was quick on his feet and scrambled for positive yards numerous times.  Favre's smaller stature has led many to question whether or not he will be able to get the job done in big time SEC football.  Favre has no doubt heard many of these rumblings because when he scrambled for positive yards, there was no sliding to the ground by him to avoid a collision.  Quite the contrary.  Favre lowered his shoulder and plowed into defenders much to the delight of all those in attendance at Davis Wade Stadium.

Farve seemed to be making the most of his debut for the Bulldog faithful and his statement after the game pretty much said everything you need to know about what was going on in his head.

"To me, I’m still battling for the No. 1 job. So until somebody tells me something different, I’ll go from there."

I'm almost certain that Chris Relf is "the guy" for the Bulldogs in 2011, but you can't ignore a bold statement like that.  Dylan Favre may not be the starting quarterback this year, but you certainly can't count him out for 2012.  He was 17-of 26 passing for 199 yards with one passing TD.

As good as Favre and Relf looked, once Tyler Russell got settled down and in a rhythm, he looked good too.  Who would've ever thought that Mississippi State would have three, count 'em three, good quarterbacks?

When it was all said and done, the Maroon team won a very competitive game 23-20.  The White team almost pulled off the victory, but it was Dylan Favre's 27 yard pass to Sylvester Hemphill that put the Maroon team in position to seal the deal as the clock ticked away.