Our State: A Bold Statement

Share All sharing options for: Our State: A Bold Statement 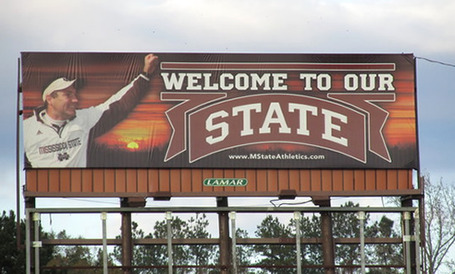 Continuing along the same lines as our last post on boldness, with Dan Mullen as head coach and Scott Stricklin at the helm of the MSU Athletics department, there has been renewed vigor in the rivalry with The School Up North.

Dan Mullen started it off when he refused to call our in-state rival by their name. Many have compared it to the shots taken in the rivalry between Ohio State and Michigan (Buckeye fans commonly refer to Michigan as the school up north as well).

The maroon faithful have collectively taken up this moniker, and in the process aggravating our rivals fan base and rekindling the hatred in the rivalry. Just take a look at our Q & A exchange with fellow SBN blog Red Cup Rebellion.

The ultimate slap in the face came in form of a billboard campaign launched shortly after the end of the 2010 football season. It shows coach Dan Mullen raising his fist in victory along with a simple message: "Welcome To Our State". This is meant to show everyone which school and program is on the rise in the state of Mississippi.

And it seems to have proven true. While the Bulldogs enjoyed an 8-4 season, a victory over TSUN and a New Years Day bowl victory over Michigan in the Gator Bowl, the Black Bear football team endured a losing season, less-than-stellar attendance, criticism from all angles of over-signing, and more. The rivals fan-base is in complete disarray (due in large part to a recen mascot change) while the Bulldogs are stronger and more united than ever.