Crxxm interviews for the UNC job

Share All sharing options for: Crxxm interviews for the UNC job 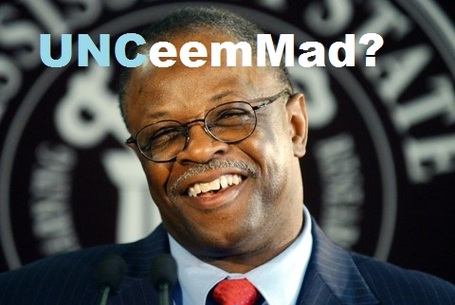 (Croom speaks, in a James Earl Jones but not as cool voice): Hello friend, sorry about that door and that secretary I ran over, I'm sure she was a nice girl

Dick Baddour, UNC Athletic Director: Yes, yes she was Coach. (sighs...) Come on in coach. How was your trip over?

Croom: Oh well it was just fine coach thanks for asking hey I noticed your first name is Dick and yeah it does make me snicker some but I bet the kids tease you and well that's just not the right way.

Dick: Yeah, it gets some laughs. Anyways coach, shall we begin the interview?

Dick: Okay Coach, tell me about why we should hire YOU to be the next Football Coach here at UNC?

Crxom: Well ya know sir I have tons of experience; I've coached Green Bay, St. Louis, all over really, and I feel that I am a perfect fit to clean up and manage this troubled program. And don't tell anybody this, but I was secretly dreaming of the UNC job even when I was back at MState. 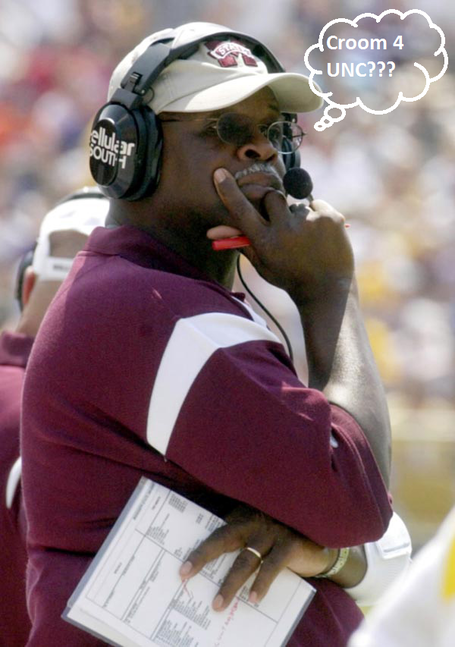 Dick: Don't you mean, you're a perfect fit to take this troubled program back to its glory days?

Crxxm: Oh no sir I don't expect they'll be any thing of that sort, just four, maybe five years of below average season's forcing your fanbase to hate me and you to well fire me in a fit ultimately causing you to drive your car into the Atlantic Ocean.

Dick: Oh my. So is that why Greg Byrne went to Arizona? To avoid driving into the Atlantic after his rage with your 4-8 season?

Croom: That is correct my friend, as they say, ain't no ocean front property in Arizona! 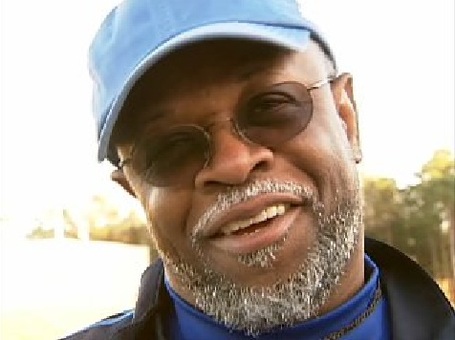 Dick: So, coach, tell me about your time then at Mississippi State. I understand it wasn't the most successful 4 years of coaching, but what positive would you take out of it, and looking back now, what would you change?

Slytantic: Oh well I really wouldn't change anything. See because I built that program THE RIGHT WAY sir. None of those riff raff thugs in my programs or those pesky 5* athletes. Just down to earth, meat and potatoes 230 D-Linemen with big hearts. And besides, it was the perfect cover job for me and Woody to hide out in a place with, you know, enough people around so we weren't alone, but the team was so bad the nation didn't really pay attention.

Dick: I'm sorry coach, your perfect cover job... for what?

Crxom: Oh I guess I can mention it now, but I was formerly with the CIA. We were working in the southeast during that time trying to flush out a secret society of tree killers which had set up camp near Tuscaloosa, and being the football coach in Starkville was the perfect cover. I didn't really have to practice the boys that often, I would just go out, say a few words from the golf cart, then drive away and scoot over to Tuscaloosa to work on my undercover CIA operations and things of that sort. We were actually around the area secretly until that one guy went nuts and killed all those poor trees over there in Auburn. That's definately not THE RIGHT WAY.

Dick: So, (laughs nervously) you're not still in the CIA now are you? Just looking to hide out in our program for a few years while you run our program into the ground?

Crxxms: Oh no sir I retired a few months ago, after I caught Bin Laden.

Dick: YOU caught Bin Laden, I thought you were in St. Louis coaching the St. Louis Rams RB's?

S.Croom: Did you ever see me on the sidelines?

Dick: You're right, now that I think about it, I didn't. I don't really know where you've been the last few years.... Moving on coach. Did you bring a copy of your resume?

Sly Croom: Oh absolutely William I have it right here. 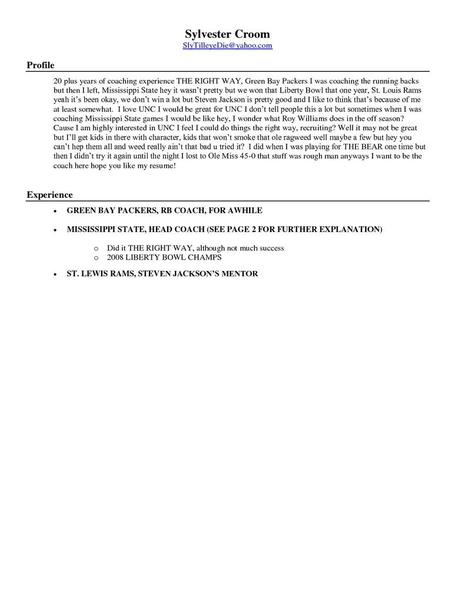 Dick: Wow coach I have to say this is quite an unorthodox resume you have here. Can you explain the "page 2" to me perhaps?

Crxxm: OH yes sir it's easy see, that's a summation of events that occurred while I was coach there at State. 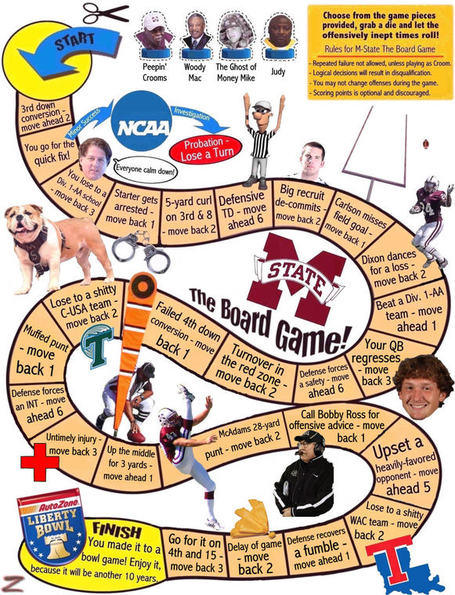 Dick: Oh my there's alot of awful things on here...

Crxxm: Sure, but there IS a Liberty Bowl victory on there.

Dick: Yeah but it says here you lost to Maine? They have a football team???

Dick: Well coach, I'm just going to level with you: Butch Davis left this program with an awful image. We need someone like you with a squeaky clean image to come in and "right the ship."

Croom: (smiling widely) Well coach I am just the man for the job! Like I've ALWAYS said, the only color that really matters is baby blue!

Dick: So coach, last but not least.... where do you see this program in 5 years under your helm? 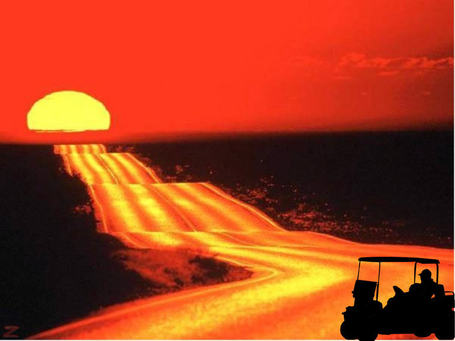 *Board Game and Sunset Croom Fark's via Center Z of Sixpackspeak

*Yes I realize Dick Baddour is no longer the UNC athletic director.

*The above is not an actual interview.