Share All sharing options for: 2011 Football Previews: UT-Marshall! Martian? no its UT-Martin! 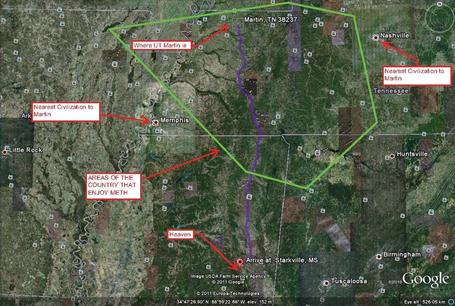 The UT-Martin SkyHawks dot the State schedule this year for the 9th game on Saturday, November 5th. This game will also serve as the homecoming game, aka cupcake opponent and none of the girls watch the game they just judge the girls on the homecoming court the whole time OH I KNOW THEY DIDN'T PUT THAT HOE ON THE COURT (they did)

This years homecoming opponent may seem to be another pushover FCS university, but the SkyHawks do return some talented players. This season's squad returns 5 pre-season all OVC performers. From the School's Website:

Shiver led the Skyhawks in receiving this past season with 36 catches for 634 yards and five touchdowns. He averaged 17.6 yards per catch.

Nalls led the defense with seven TFL's and five sacks. He finished the 2010 season with 28 total tackles.

Harper was second on the team with 42 total tackles. He had three interceptions and six pass breakups along with two fumble recoveries.

After taking that trip into Phil Steele la-la land, it's back to reality for the Skyhawks. Barring injuries, by this point in the season the Bulldog offense should be a smooth running machine and should run, pass and catch their way past the men from Martin. Not to mention, by this time in the season, Fletcher Cox and Josh Boyd will need sustenance to keep them warm in the winter (HIDE YA SCRAGGLY 3RD STRING RUNNING BACKS MARTIN)

Sparing you the reader another session of telling you how good Ballard and Perkins are (you know they're good), let's get down to the point: this game should be over by halftime. And after the boys take it in at the half our biggest concern of the day will be which of the 3 bulldogs has the cowbell (the Jumbotron game in the 3rd quarter) and if we really think whiskey-pong is such a good idea. My prediction is the Bulldogs sputter some due to overlooking this game for the HUGE match-up with Bama at home the next week, but we should ultimately straighten things out for a nice 3-4 TD win.

Weather Prediction: November in Mississippi, so I'll say it'll be cool and we'll be all excited and wear long sleeves, then curse when it gets to like 70 and we're sweating in the middle of the student section.

In an unexpected move, the UT-Martin School Pres. texted me this week asking me to help him come up with a "cool, hip" name for the school that will make all the kids want to drive out to the middle of nowhere to go to college come to a great place like Martin! So here are a few names I told him to consider:

that's all I got

THEY HAVE A MOBILE APP Y'ALL

And just because I was thinking about it, a Martin clip for ya