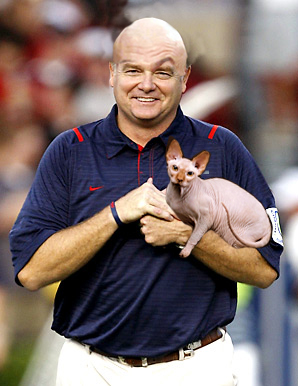 That's right Mr. Boone, soon I we will have all of the Bulldogs precious recruits, and then there will be no stopping us. Muah, muahahaha, muahahahaha.

The final game of the regular season.  The desert to your Thanksgiving Turkey.  The battle versus TSUN.  The Egg Bowl.

Whatever you call it, this year's game versus THE SCHOOL WHO SHALL NOT BE NAMED HENCEFORTH (will use multiple names other than OM) will be at home, November 26th in front of a Mississippi State Bulldog nation eager to make it 3 wins of The Fighting Faulkners (1) in a row.

By this time in a season, the Egg Bowl has shaped itself into one of two types of games: 1) Your bowl game, 2) Your beatdown of a rival on the way to the bowl game.  Two years ago, a slightly disappointed, yet ever enthusiastic MState crowd watched in amazement as our Bulldogs dismantled Dexter McCluster and the eventual Cotton Bowl champion Rebellious Black Bears (2).  Last year, it was the Bulldogs turn for a bowl game, however they would not bow out to the Jevan Snead Pick Sixes (3), taking the game 31-23 on their way to a Gator Bowl victory and 9 win season.

But what can we expect in this year's egg bowl showdown in Starkville?  We will try to tell you what we expect from this years game, besides the 3 obvious things to expect:

1) Houston Nutt's job to be on the line

3) If they lose, rebel fans will write editorial pieces in papers about how trashy our billboards are, but how they will also want us to know that they don't affect them AT ALL, you guys.

The our basketball coach choked out a taxi cab driver's (4) will start out this season with Nathan Stanley Raymond CottonBarry Brunetti at the helm, however after Randal Mackey gets back from his suspension (LOL HE PUNCHED A COP) the two will most likely have an ongoing qb battle throughout the year.  Honestly, at this point I'm less interested in finishing this Egg Bowl preview and more interested in showing you this: 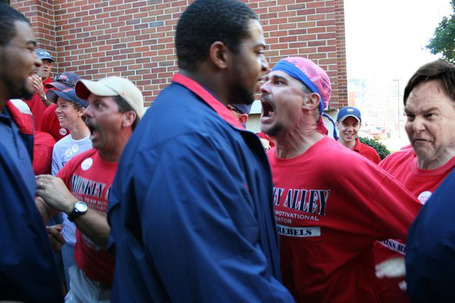 I MAY BE YOUR COACH DAWGNABBIT BUT I JOIN THESE MEN IN THEIR OVER EXUBERANT, SLIGHTLY HOMOSEXUAL YET EQUALLY UNDERSTANDABLE EXCITEMENT/ANGER AT YOUR PLAY THIS YEAR.  YES, I SHOULD, IN FACT, BE IN LINE WITH YOU GUYS BUT I CHOSE TO STAND HERE AND YELL OBSCENITIES AT YOU AM I NOT ENTITLED TO DO THAT EVERY SO OFTEN?!?

No matter what each team's record is coming into this game each year, most games have proved to be hard fought, fairly close ballgames except for 2008 OH MY GOD THERE'S SO MUCH BLOOD SOMEONE HELP ME PUT TYSON BACK TOGETHER.  But things have changed since that day.  There's a new sheriff/mayor/coach/diety? in Starkville and that man's name is Dan Mullen.  And even though yes it has been a short career in Starkville so far, coach Mullen has flat out owned a few points less than Jacksonville State (5), much to their dismay.  Barring major injuries throughout the season, I wouldn't expect this season to be any less.  Although I expect the Fighting Leigh Anne Toughy's (6) to be better this year than alot of folks are giving them credit for, I just don't see them coming into Starkville and getting the W this year.  Look for Coach Mullen, Ralphie, Fletcher Cox and the whole gang to bring the Golden Egg back to Starkville for another long and happy year of rivalry glory AND BILLBOARDS WE WILL MAKE SO MANY MORE BILLBOARDS YOU GUYS