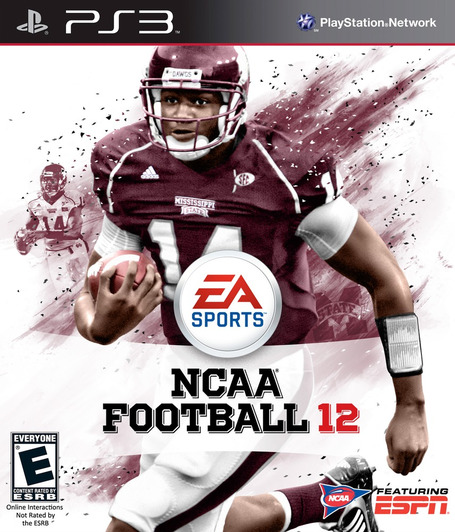 Bulldog fans, the time has finally arrived!  Tomorrow night the Dawgs begin their 2011 campaign with a trip to Tennessee to take on the Memphis Tigers at the Liberty Bowl.

If your hunger for Mississippi State football is so bad you can't think straight, consider this an appetizer for tomorrow night's main course.

Last season's EA Sports football simulations were extremely accurate in predicting wins and losses for the Bulldogs.  Check in right here every Wednesday to see simulation results for every game of the season.

So how did the Bulldogs fare against the Memphis Tigers on NCAA Football '12?

MSU calls heads on the coin toss and heads it is.  MSU chooses to kick off first.

Jerrell Rhodes returns the kick off 20 yards and Memphis quarterback Andy Summerlin steps onto the field.  He completes his first pass and Memphis quickly gets a first down.  Jerrell Rhodes runs the ball three times in a row and is suddenly injured.  I didn't catch what the injury was, but it was serious enough that Rhodes never returned to the game.

With their running back out, the Tigers seem to shift their focus back to the air and it pays off.  Summerlin quickly throws his way to the red zone...the Bulldog secondary is struggling big time.

Even with a short field, Summerlin continues to throw passes. The Bulldogs respond with blitzes and pressure from Charles Mitchell forces bad passes.  Summerlin doesn't let up with the passing and throws a sure TD only to be dropped by the receiver in the end zone.

The Tigers find themselves in a 4th and goal situation and settle for a field goal.  Memphis now leads 3-0.

After the kick off return, Chris Relf immediately begins to give the ball to Vick Ballard.  Ballard runs three times in a row but stops short of earning a first down.  The Bulldogs are forced to punt on a three and out.

Memphis is unable to get anything going on their next drive and punts the ball right back.

LaDarius Perkins makes a good return to midfield.  Relf and Perkins connect on an option play and MSU finds their first first down of the game.  The trio of Relf, Perkins, and Ballard continue the running attack and finally bully their way into the red zone just as the first quarter expires.

MSU is forced to settle for a Derek DePasquale field goal andtie the game to start the second quarter.  The score is 3-3.

Memphis makes a couple of nice passes, but their drive fizzles out and they punt the ball away.

After a twenty yard return by Chad Bumphis, Relf steps back on the field and immediately runs up the middle for a six yard gain.  Relf suddenly does something he hasn't done the entire game, he throws a pass and completes it to Michael Carr for a first down.  Relf completes a couple of more short passes andthe Bulldogs find themselves at midfield.  On the next play, Relf hands the ball off to Ballard and he takes it to the house for a touchdown.  The five play, 63 yard drive puts the Bulldogs on top 10-3.

Memphis quarterback Andy Summerlinbegins to play withmore urgency midway through the second quarter and a deep pass thrown down the field is nearly intercepted by the Bulldogs.  On third and ten, Summerlin is sacked by Fletcher Cox for a seven yard loss.

The Tigers are forced to punt to Chad Bumphis, andhe goes no where with it. The first play of the drive is a pass to Chris Smith and the Bulldogs earn and first down. Withthe quarter beginning to wind down, MSU takes a time out to conserve a little time.  Chris Relf drops back to pass on the next play, but is under heavy pressure from the Tigers.  Relfdances around and manages to escape a sure sack.  Relf continues to look way down the field andfinally sets his sights on Chris Smith again. Smith catches the pass and takes it forty-eight yards for another TD.  MSU now leads 17-3.

With less than a minute to go in the first half, the Tigers make one more attempt to score.  Andy Summerlinis unable to find an open receiver and is sacked by Cameron Lawrence for a seven yard loss.  Memphis decides to play it safe and run the clock out.

MSU returns the kick off to about the twenty-two yard line.  A couple of runs by Relf and Ballard gets a first down.  Relf drops back for a pass on the next play and he has all day to throw the ball. Unfortunately, he can't find anyone deep and decides to settle for a short pass to Sylvester Hemphill for a short gain.  Relf tucks and runs for the first down on the next play andthen completes a bomb down the field to Chris Smith.  A flag is thrown on the play but fortunately it turns out to be on Memphis for pass interference.  Since they're now in the red zone, MSU declines the penalty and hopes Ballard can punch it in for six.  He goes no where on the play and suffers a concussion.  Ballard out for the game.  Relf completes a short pass to Brandon Heavens andthe Bulldogs find themselves in a first and goal situation.  Relf pitches the ball to Michael Carr on an option play and Carr easily trots into the end zone for the TD.  The nine play, seventy-three yard drive boosts the Bulldogs to a 24-3 lead over Memphis.

Marcus Rucker returns the ball 18 yards for the Tigers.  Summerlin is immediately sacked again for a loss of three on the play.  Again, Summerlin drops back and looks down the field for a deep receiver.  He settles on one and fires a bullet only to be intercepted by Charles Mitchell.

The interception gets the Bulldogs great field position and Relf hands the ball off to La Darius Perkins to start the drive.  Perkins cuts through the Tiger linebackers for an eight-teen yard gain to put MSU in field goal range.  Relf and Perkins continue to run the ball three more times and three times they are tackled for losses.  Derek DePasquale steps onto the field to attempt a 38 yard field goal and is successful.  The third quarter expires and MSU now leads 27-3.

Memphis makes an average kick return and then immediately punts the ball after a three and out.

A botched run from Chris Relf results in a three yard loss but he more than makes up for it on the next play earning eighteen yards with a run up the middle.  Its Perkins' turn next and he runs to the Tiger twenty-four yard line.  Their is a noticeable change in pace for the Bulldogs as they begin to melt the clock away.  Now committed to the run, MSU is unable to get any positive yards and Derek DePasquale returns again for another successful 40 yard field goal.  The score is now 30-3.

The Tigers return for one last chance to put some points on the board.  Andy Summerlin immediately makes a perfect pass that is completed at the fifty yard line.  Unfortunately, for Summerlin, the Bulldogs are unrattled and sack him for back to back losses.

MSU eventually gets the ball back.  Relf takes a knee to end the game.

Despite the early third quarter injury, Vick Ballard was the game's leading rusher with 86 yards and 1 TD.