We are just under an hour from kickoff on the Plains. Here are some links we have collected from this mornings papers and blog posts.

MSU is trying to win its SEC opener for the first time in 12 years, and having Fletcher Cox back should help. The junior defensive tackle was one of five players suspended for last week's game at Memphis, but he is dressed out and available today, according to a team spokesman. Of the other four, second-string left tackle Blaine Clausell, third-string quarterback Dylan Favre and third-string tight end Malcolm Johnson are also dressed out; second-string sam linebacker Chris Hughes is not, but the spokesman would not confirm whether he's still on suspension.

In addition to Fletcher Cox & co, Nick Griffin is also dressing out today. He has been recovering from an ACL injury that happened in the spring.

The Tigers are starting A.J. Greene in place of Chad Slade at right tackle and Slade is moving over to start at right guard in place of John Sullen for today's 11:21 a.m. kickoff against Mississippi State in Jordan-Hare Stadium.

They said changes were coming, and here they are. Greene suffered an ankle injury 3 games into the 2010 season.

And finally, a little caption fun. Here is a pic of Mullen and Chizik talking during pre-game walkthroughs this morning. What are they saying to each other? 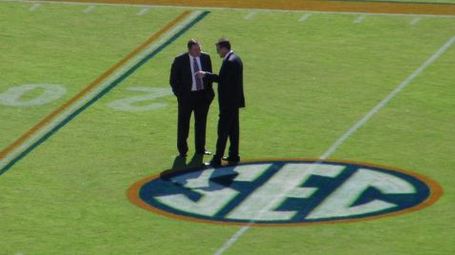