Strangely Grindin': How Strange Brew Shows that It's Grindin' for Its State

Share All sharing options for: Strangely Grindin': How Strange Brew Shows that It's Grindin' for Its State

Whether you're a coffee fan or not, chances are if you live in Starkville or travel there for athletic events you know about Strange Brew Coffeehouse.  Nestled at the western entrance to our beautiful University along Highway 12 sits the local Coffee shop that is quickly becoming as famous for their advertising sign as they are for their Sea Turtle Frappe.

Over the past three falls, Bulldog fans have become accustomed to riding by Shane Reed's Strange Brew to find some "words of wisdom" about or towards the opposing team that the Bulldogs will face that week.  Although Shane has been practicing this game week tradition for several years now, the game week sign campaign was made famous most notably last fall before the Bulldog's took on Auburn.

Auburn fans called the Brew relentlessly after the signs went up, infuriated that a business owner would promote taunting in such a way.  But you can't hold that against Shane and the Brew crew; they're just grindin' for their State.

Although their business is centered around scones, shirts and damn fine coffee, Strange Brew takes to the sign and to Twitter to tell of their passion for Bulldog sports.  If you follow Shane and the gang on twitter then you know there's hardly a person out there (aside from Whit Waide) that is more passionate about this university and its athletic programs than them.  As for the sign, well that part is just for fun.  Opposing fans can get mad and scream and call and blog about the sign and its sayings all they please, but I doubt the tradition will end anytime soon.  Because that sign is more than just a fun way to tell LSU or Auburn or TSUN what we're thinking, it's a way to show State fans that True Maroon can shine through no matter what your profession is.

The term "grind" was made famous by one Anthony Dixon after a win over Kentucky on a cool October night in 2009.  Little did Anthony know that the term "grind" would become the measure of how true a fan one is to "Our State."  If you know the spirit behind the sign, the twitter account and the business that is Strange Brew, then you know that they are grindin' more than just coffee beans over there.  They're Grindin' for OUR State. 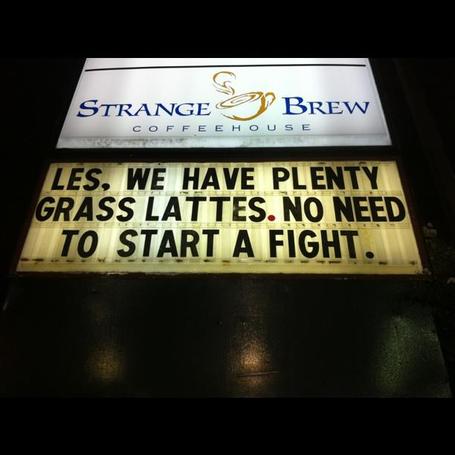 Check out Shane and the gang at StrangeBrew on twitter or in real life at the corner of Highway 12 and Spring Street.