I don't think there was a State fan out there that wasn't discouraged when we watched Tobias Smith be helped off the field Thursday night.  Tobias, a talented Junior OL, has had more than his share of injury bad luck in his career, so it was no surprise to find out Friday that he had torn his ACL and will be out for the remainder of the season.  Tobias' injury followed after an Auburn game two weeks ago where we saw both James Carmon and Quentin Saulsberry be helped off the field with injuries.  Although Carmon and Saulsberry's injuries turned out to be much more minor than originally thought, it has become clear that the Bulldogs will have to battle past the injury bug, along with early season losses, if they wish to repeat last years success.

For State the run to another Bowl game starts this weekend with Louisiana Tech.  Although the Bulldogs of the Louisiana variety are a lesser opponent than our previous two, State fan's must not forget what happened the last time we underestimated La Tech back in 2008. 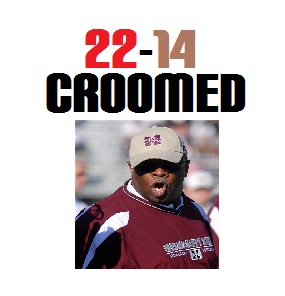 Sure that was a different program, coach and team, and I'd bet Coach Mullen will have this year's squad more than ready to play when they hit the field Saturday night.  If the Bulldogs can get a victory Saturday like we expect them to, the next task lying ahead in the run to a Bowl Game will be the talented yet underachieving Bulldogs of Georgia.

Georgia came into this season with high hopes riding on the tails of a talented Sopohmore QB and Freshman RB named Isaiah Crowell.  But after suspensions and an 0-2 start, the Bulldogs find themselves in the same shoes Mississippi State is in: just trying to salvage the season and make a new years day bowl.

Although I feel like MSU is the more talented and experienced of these two teams, playing on the road in the SEC is never easy anywhere, let alone in Athens.  State has played Georgia close several times in Athens over the years but has never been able to close the game out and take home a W.  If State can get a win vs. La Tech and begin to build some confidence and momentum, I think this team is very capable of bringing a win back from Georgia.

But how will the injuries to starting guard Tobias Smith and starting tackle James Carmon effect State hereout?

There's no question that losing Tobias for the year was a huge blow to this offensive line unit.  I felt like if they could stay healthy this OL had the potential to be as good as last years unit, but now they will just do their best to make it through the season.  That said, I have all the confidence in the world with Dillon Day snapping the ball and Quentin Saulsberry moving over to guard to replace the injured Smith.  If Dillon continues to improve, play like an upperclassmen like he did against Auburn when Saulsberry was out and become that nasty linemen we have heard he can be, then I think State will be just find going through the rest of the season.  As for the left tackle position, the coaches have stated that Carmon could be back as early as this week, though I would think they would want to sit him and get him more rest with Georgia waiting in the wings the following weekend.

So far what I've seen from Blaine Clausell I have mostly liked.  Although it was obvious Blaine was nervous coming in against Auburn, I thought for the most part he played a decent game in protecting Relf's backside.  Sure it was tougher sledding against LSU, but I'm not so sure that two NFL LT's together could block most of the Bayou Bengals starting D-Linemen.

So what can we expect going forward after the 1-2 start with La Tech, Georgia and UAB up next?

I really think you can expect this team to begin to play with that sense of "every game matters now" mentality.  Rest assured CDM has instilled into the guys heads that we need victories in these next three games if we want to play again on New Year's Day.

I would look for Dan to tailor the offense somewhat to protect Relf in the pocket as players like Day and Clausell continue to grow in the offense.  WIth big James Carmon set to be back in the lineup in the next two or three weeks, we can hope this unit can then gel to be able to pave the way for the solid running game we've grown accustomed to seeing.

The key to to this three game stretch more than anything else though is starting quick against La Tech.  If State can come out and hit Tech early and often then they can begin to rebuild some of that "swagger" they held at the beginning of the season and hopefully carry that momentum on with them as the season continues to unfold.

If State can play at the level they are capable of and be 4-2 coming into the South Carolina game on October 15th, this team could again be on it's way to another 9 win season.