Share All sharing options for: Lost Bulldogs fall to hogs again in Fayetteville, 98-88 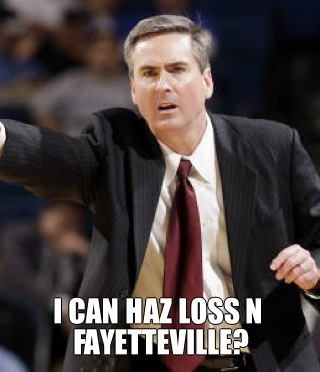 Where have we seen this act before? In what has become an annual tradition for Rick Stansbury and Co., State showed up in Fayetteville Saturday night looking LOST, and was never in a game that finished 98-88 and wasn't really even that close. Arkansas used their patented press defense to force 18 State turnovers and used hot shooting to keep State at a distance in front of 12,000+ in Fayetteville (and those of us painfully watching on CSS).

Arkansas was led in scoring by both Nick Mason and Julysses Nobles in with 24 points. State was led by DeVille Smith's 25 points. Although State is still a healthy 13-3 on the season, State fans are seemingly concerned with seeing "the same ole results" that we've seen from State teams of the past when playing SEC road games.

Yes, it's only one SEC game, so not all is lost. But if State is to live up to its potential this year as an SEC contender, then changes are going to have to be made to see that Saturday night's effort isn't duplicated again this season.