The gang picks what we hope is just as an exciting set of games as we witnessed last weekend. Can week 7 in the SEC live up to what week 6 gave us?

Share All sharing options for: FWtCT Picks the SEC - Week 7

We thought last week would be special, and we were not disappointed one bit. We got to see a dominant performance in a big time game from South Carolina. We got to see Florida share with the country that they are for real with a big home win over LSU. We got to see exciting finishes, as Ole Miss snared defeat from the jaws of victory. Will we see more of the same excitement in the SEC in week 7? We sure hope so. But first, let's take a look at how everyone here at For Whom the Cowbell Tolls picked last week, and where everyone stands after almost 60 games picked this year. 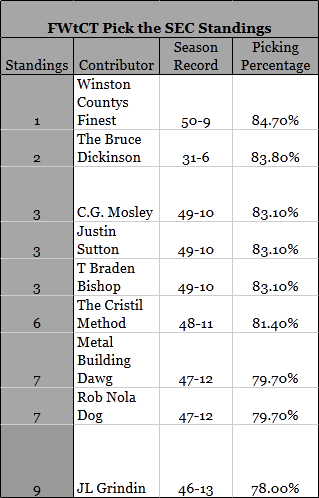 After briefly sharing the top spot with C.G. Mosley last week, winstoncountysfinest has again reestablished himself as the king of the FWtCT picks mountain. Overall, week 6 proved to be the most difficult week to pick thus far as we expected, as the best record of any picker was 4-2. Justin Sutton, Braden Bishop, and The Bruce Dickinson all registered 4-2 weeks, with those two misses mostly thanks to Auburn and Missouri taking unexpected losses. I joined Justin, JLgrindin, and C.G. Mosley aboard the we-believe-too-much-in-LSU train, as we all incorrectly picked the pair of Tigers to win. Metal Building Dawg, robnoladog, winstoncountysfinest, and myself all evened out at 3-3 on the week, with C.G. Mosley (2-4) and JLgrindin (1-5) rounding out the picking order for the week. Not the best week for our buddy JL, but there's always this week.

As you can see, week 6's picks shook up the standings a bit, but only in a minor way. C.G. Mosley's 2-4 week saw him descend back to the #3 spot where he is currently tied with Justin and Braden. The Bruce Dickinson still clings to sole posession of 2nd place, while I fell one game behind the group in 3rd as I stand in 6th place. MBD and Rob stayed tied with each other, except now in 7th place instead of last. And as we mentioned, it was not the best week for JLgrindin, and his poor picking decisions shot him from a tie for 3rd to last place, where he currently sits all by himself.

Can JL redeem himself in week 7? Can someone finally steal the top spot from WCF? Will Braden pick Florida State in a game they aren't even playing in? Let's take a look at the week 7 picks to see who everyone is taking. 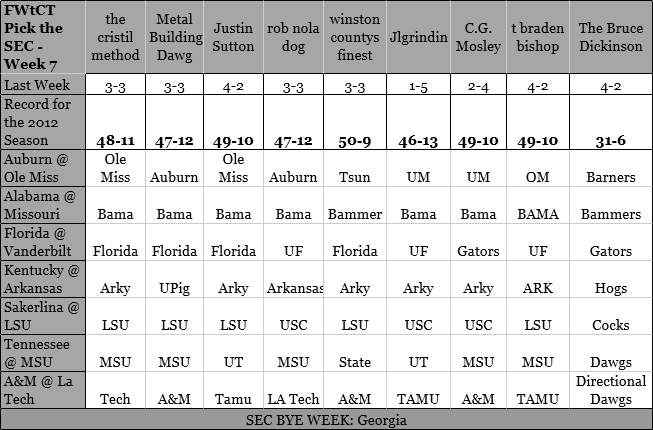 There is again a lot of consistency amongst the For Whom the Cowbell Tolls staff as to who will win this weekend, so we will all sink or swim together, it seems. Everyone except MBD believes Ole Miss will shake of its SEC and Auburn losing streaks, while everyone unanimously thinks Alabama should easily handle Missouri in Columbia this weekend. Florida appears to be a sure thing as they travel this weekend to Nashville to take on Vanderbilt, and the group agrees across the board that the Gators will take care of business.

Everyone is in agreement on UK-Arkansas, and most think State will beat Tennessee. The biggest disagreement comes in the South Carolina at LSU and Texas A&M at La Tech games. Rob, JL, C.G. and TBD all thing South Carolina can come in and win in Death Valley, while the rest of us believe LSU will protect the home turf. In the other night game, Rob, TBD, and myself all think the Bulldogs of Ruston can pull the upset, while the rest of the gang believes the fighting Manziel's will win another road game.

Well, those are our picks for the week. What are yours?