Could week 7 live up to the greatness that week 6 gave us? Will we see another upset like Florida State? Another great game like Florida - LSU? Speaking of the Tigers, can they rebound against the #3 Gamecocks this afternoon? All those questions and more will be answered today, and we're here to help you decide which games are worth your watch.

Well, it's that time again. Time to strap up your chinstrap and lace up your cleats. It's another wonderful Saturday in the merry land of college football season, and we are once again blessed with a full slate of promising, big time matchups. Last weekend lived up to every single expectation we gave it, as there were upsets, statement wins, and exciting finishes. Will we see more of that this weekend? I sure hope so, and I'm willing to be that somewhere in the list of games that we have is an upset or two, and somewhere in there is an exciting finish, just waiting for us. Before we hop into this weekend's slate of games and viewers guide, let's take a quick look at how I did against the spread last week.

In what was without a doubt my best weekend picking yet, I was able to be fortunate enough to get four out of the five games picked correctly. Now, I did think that Georgia-South Carolina would be closer than it ended up being, but hey, South Carolina covered the spread, by about 30x. I obviously put too much faith in Les Miles, Zach Mettenberger and the Tigers to win in the Swamp, and it cost me a perfect week of picking games. Now that we've looked at that, let's take a look at what to watch for Saturday, October 13th, 2012.

The gameday crew touches down this weekend in the land of Touchdown Jesus and Louszh Hotlzsh to cover the big game in South Bend between the Cardinal of Stanford and the Fighting Irish of Notre Dame. This game would be even bigger had it not been for Washington several weeks ago, but nevertheless it's a big game between two schools who think they're smarter than each other. I will be interested to see the sign choices of the Notre Dame faithful - the SBNation ND blog One Foot Down was taking suggestions earlier in the week, and there were some pretty good ones give there. Here are some of my favorite suggestions: 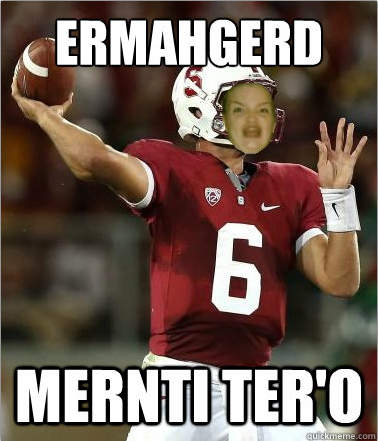 Who needs a conference now?

Picture of Manti (T'eo) with caption:

Who will the gang pick to win? Will they even discuss the State - Tennessee game? Will Lou Holtz be put on a live feed from his study pantsless watching game film from old Stanford-ND matchups? All the above scenarios are possible. Also, I kind of hope this happens again: 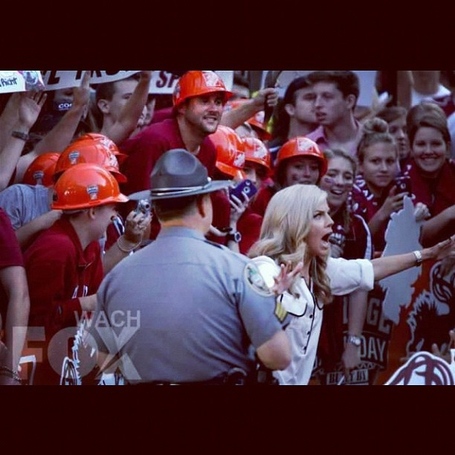 To quote Guard Engleheart from The Longest Yard (with a slight tweak):

The fighting old guys head into Ames to face the fighting Paul Rhoads in what could be quite a test for the Wildcats. There may also be an overlook factor in this one as Kansas State heads to Morgantown next weekend for a huge game against (5) West Virginia. Iowa State is good enough to trip up this team if they don't come in focused, but Bill Snyder is old, and old people don't get ahead of themselves. I like Kansas State to be too much here.

How I'd bet [hypothetically] - Kansas State is favored by just under a touchdown, and I think they cover that, winning by 2 TDs.

The annual Red River Shootout takes place this weekend in a game that has been diminished a bit by losses to both teams in recent weeks. Nevertheless this game should be a fun one, as the Longhorns try to snap a two game losing streak to the Sooners. Oklahoma isn't what it was in recent seasons, and Texas is finally more equipped on offense to compete in this game. Don't count out Texas here.

How I'd bet [hypothetically] - Texas (+3) beats the spread and the Sooners to right the ship and fall in line at 3rd behind Kansas State and West Virginia in the Big XII pecking order.

No, you didn't read that wrong: Ole Miss is a favorite to win an SEC game. Partially because Auburn is making a strong case as the SEC's dumpsterfire of the year so far, and partially because this isn't the same Ole Miss team from 2010 and 2011. The Rebels aren't quite there yet, as they proved last week, but they should beat a hapless Auburn, who at this point is just ready for basketball season (HINT: that's not a normal thing on the plains). Ole Miss gets a second change in as many weeks to tally an SEC win, but this time succeeds.

Before the season and before Georgia visited over a month ago, I bet Missouri fans were really looking forward to this game. Now? Yeah, I would venture to say not so much. Alabama is coming off a bye week and on complete cruise control heading into November's matchup's with State and LSU. Look for Bama to have a big day today.

How I'd bet [hypothetically] - Alabama (-21) covers easily, pumps the brakes late and wins by a "marginal" 28 points.

ALL OF UR PASSING DEFENSE ARE BELONG TO GENO, Tommy Tubberville. The spread on this one is the easiest money of the week to me, as West Virginia should win easily over a TT team that was clobbered 41-20 at home last week against Oklahoma. The only way this game is close is if West Virginia gets caught looking ahead to Kansas State next week. If they come out flat this afternoon, expect Dan Holgorsen to light at least two players on fire at halftime doing a whiskey flamer party trick he learned last week on the streets of Austin post-game. Advantage: 'Eers (is that seriously the abbreviation they use?)

How I'd bet [hypothetically] - Oh yea, West Virginia (-4) definitely covers. They cover in the first 30 seconds, and don't let up.

"THISH ONEH WILLSH DECIDESH IF NOTER DAMSH CAN WINSZ THE B-SHE-ESS TITLESH GAMESSH FOUR THE FORTH TIME THIS YEARSH" - Lou Holtz, yelling directly into a heavily sedated Mark May's ear at around 2:15 this afternoon. Seriously - the Irish are better than they've been in previous seasons where Lou Holtz proclaimed their glory, and this game will be their third big test already this season. I believe the Domers get by the Cardnial, setting up another big game for them two weeks from now as they travel to Norman to take on the Sooners of Oklahoma.

For the second weekend in a row, South Carolina will play a game that will direct their season to one of either National Championship contention or "good, not great". The Gamecocks do have more wiggle room in the East with a win already over Georgia than LSU has in the West, so expect LSU to be the more motivated team here. Don't get me wrong, I think South Carolina will be ready to play, but it's at Death Valley: a place that very few teams (or fans) live to tell about. People talk about how worried they are about LSU's offense, but let me say this again: AT DEATH VALLEY. Don't ignore the power of that place.

How I'd bet [hypothetically] - LSU (-3) covers and wins by two field goals.

State passed its first barometer test earlier this year against Auburn, only to find out later that the barometer was one of those cheap Korean knockoffs that doesn't even work. State's second barometer test comes tonight against Tennessee: a team that can hurt you if you do not execute defensively. Yes, Tennessee has played a more difficult schedule. No, that doesn't really matter. If MSU shows up to play (and not like they did in the past 3 games), then this one should be wrapped in maroon and white. If they don't show up to play, and cannot get pressure on QB Tyler Bray? Look out, because it could be a long night. My prediction though is that State passes the test and moves on to Homecoming a perfect 6-0.

There are good games and there are surprise good games, and this one is the latter. Louisiana Tech is in the midst of one of the best seasons in school history, and they get to call the Aggies into lovely decadent Shreveport, Louisiana Saturday for a big non-conference game for both. Johnny Manziel has been a powderkeg of offense so far for A&M, but how will he fare under the unclean lights of Independence Stadium? My guess is: not well, and I'm taking the upset here folks.

How I'd bet [hypothetically] - Texas A&M ( -7.5) goes down in Shreveport, and so does their cover of the spread.