See who the writers at For Whom the Cowbell Tolls are picking for this weekend's slate of SEC games.

Share All sharing options for: FWtCT Picks the SEC - Week 8

We've entered the back half of the 2012 college football season already, my friends. And after a half-season worth of games to pick, let's take a look at our standings for the FWtCT Picks the SEC contest: 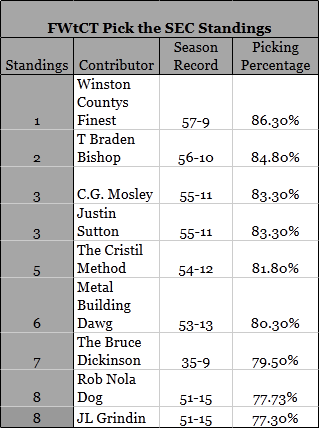 As you can see, Winston County's Finest just won't relinquish his stranglehold on the top spot, as he used another perfect weekend of picking to put more distance between himself and the second spot in the standings. T Braden Bishop, who is definitely having his wife pick for him picking strong so far this season sits in second place so far on the year, with C.G. Mosley and Justin Sutton just a game back from him in third. I sit in 5th place after 7 weeks worth of picks, with Metal Building Dawg and The Bruce Dickson just behind me in 7th and 8th respectively. That leaves just Rob Nola Dog and JLgrindin, who currently occupy the cellar together after rob's week 7 miscues led him to fall in the standings. At the near-halfway mark, questions begin to arise. Can anyone dethrone WCF? Will Braden continue his winning ways and stay near the top of the standings? Will I continue to get lucky? And can resident gifologist/bracketologist/junction journoligist Rob Nola Dog climb out of the cellar back to the top? Anything can happen in this game of picking.... games, and I look forward to what should be an exciting second half of the season. Now let's take a look at who everyone is picking for week 8's slate of SEC matchups. 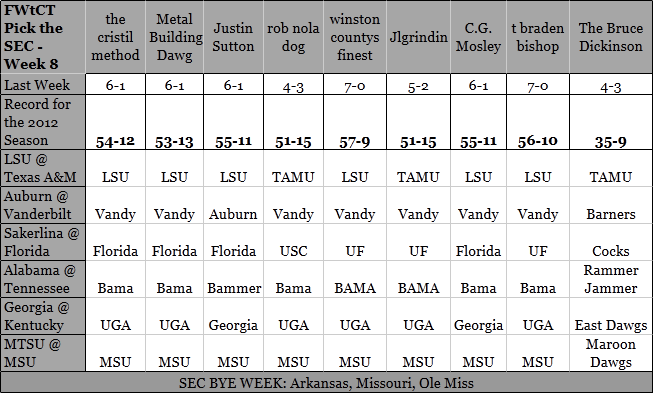 This week's schedule features 2 toss up games and 4 "we're fairly sure we know who will win that one" games in the SEC. In the all but sowed up category, it appears most of us believe Vanderbilt takes Auburn at home, Alabama wins in Knoxville, Georgia wins at Kentucky, and State takes down the Blue Raiders on homecoming. The biggest disagreements lie in the final two games of the week: LSU at Texas A&M and South Carolina at Florida.

In the LSU-A&M matchup, 6 of us believe Les Mileserables will come out on top, while Rob, JL, and Bruce D all believe the home-standing Aggies will prvail. In the College Gameday matchup of the week, only Rob and Bruce D believe the visiting Gamecocks can pull out a victory, while the rest of us believe Florida will continue its hot streak, and continue to occupy the second position of power in the SEC.

That's our picks for week 8 of the SEC schedule. Who do you guys have picked for this weekend?