Big games abound this Saturday as LSU travels to College Station, Sakerlina travels to The Swamp, Alabama to Knoxville, Kansas State to coal country, and much more! Having trouble deciding how to schedule your viewing experience this Saturday? Let us help you with this week's college football viewing guide.

Another Saturday is upon us, ladies and gentlemen. It may not quite feature the schedule we were treated with in week's 6 and 7, but week 8 of the college football season promises us to show us a good time. Week 8 does have going for it that there will be outstanding games at all time slots: LSU-A&M early, Sakerlina-Florida at 2:30, and Kansas State - West Virginia for the night game. Can LSU slow down Johnny Football? Can South Carolina beat Florida in Gainesville to finish their brutal stretch 2-1? Will Lee Corso ride a live gator into the crowd to announce his selection Saturday? We have high hopes for you, week 8. Don't let us down.

There's bad picking weekends, and then there's what I put together last weekend. Granted some of the games I picked the correct winner, I still was waaaaaaaay off on some scores from last Saturday's big matchups. the SEC games mostly went my way, but Texas, whoof. West Virginia, sheesh. I couldn't have been more wrong about those two games. ND and LSU I got the winner right but missed the spread, and A&M I missed on by two points picking the right winner. Dang you, Johnny Manziel.

We now take you live to local correspondents EVERY GATOR FAN EVER: 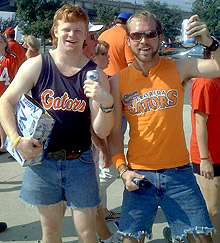 Seriously, you're kidding yourself if you think these guys are just some Wal Mart stock boys who love Florida football. No, these guys are probably mayors of prominent towns in the panhandle. Hell, I'm almost quite certain the one on the left is Jeb Bush*. And you can essentially multiply this picture times 10,000 and mix in some Affliction tees, then imagine them all throwing constant pickup lines at Samantha Steele for 4 hours. The gang will definitely pick Florida, probably via Lee Corso riding a live gator out into the crowd Joe Dirt style.

Late Morning Matchup - What is this doing here, ESPN?

Seriously ESPN, what is this game doing here? You opted for the 3rd Saturday in October for your night game instead of Les Miles versus Johnny Manziel. Yeah, good call. Look I know it's near Halloween and you want to be a part of the gorefest on TV by displaying Tennessee's slashing on primetime, but we're more in the mood for comedy, which is why we wanted Les Miles and Johnny Effing Football in that night game slot. Instead, you'll force LSU fans to wake up at 4 a.m. to begin drinking, which will ultimately cause a fight at the local Waffle House over who ordered the last bourbon pecan waffle. That fight's on you, ESPN. As for the actual game, you have to think LSU slows down the high flying one man circus known as Circus De Manziel, right? That's A&M's biggest problem: if LSU slows down the talented QB, they really have nothing else. I like Texas A&M, but I like that Tiger D even more.

How I'd bet [hypothetically] - LSU covers WITH A FAKE FIELD GOAL TO WIN OH MY GOSH MILES HAS TAKEN HIS SHIRT OFF #CHEST. LSU 24, Texas A&M 17

The Florida version of Wayne and Garth hope this Florida team is for real, otherwise they'll look foolish for getting those matching Will Muschamp lower back tats after the LSU game two weeks ago. South Carolina is finishing a brutal 3 game stretch that started with Georgia, matched them with LSU in Baton Rouge last week, and now pits them against the upstart #2 Gators in the Swamp. Marcus Lattimore will supposedly not start, but at this point seriously why do we believe anything that comes out of Spurrier's mouth? You shouldn't, and I'm willing to bet it's all a ruse. Either way, this will probably be one of those grind it out, low scoring type games like both teams have been involved in in recent weeks.

How I'd bet [hypothetically] - Tough, tough call, but I'm going to take the Gators in this one and to cover. Florida 24, South Carolina 17

TOMMY TUBBERVILLE TAKES HIS GUN SLINGING SHOW ON THE ROAD. Man, didn't think you'd hear that two weeks ago after Tech got handled at home by Oklahoma, ey? One week later and both sets of TT are the hottest thing in the Big XII after a complete dismantling of West Virginia in Lubbock. But can they carry that magic on the road with them against TCU. TCU is coping without Casey Paschall for the rest of the season, and that's going to sting them, whether it's this game or another one down the road. I think it's this one.

This game has lost a tad of its luster after West Virginia took both barrels full from Texas Tech last weekend, but still, it should be a fun game to watch. Bill Snyder brings in a methodical running offensive attack, which is essentially exactly opposite of Dana Holgorsen's throw it 150 times a game strategy. We should find out something about both teams: Kansas State - if they are for real and can win yet another big game on the road, and West Virginia - was last weekend just a fluke?

This isn't much of a night cap game compared to previous weeks, but it will have to do for this weekend. Oregon State, which has been steady not flashy all season, will look to take out the Utes of Utah, who saw their potentially great season go down the drain pretty early and now are just like whatever grab Majerus let's go drink and throw rocks at the BYU kids. Oregon State will beat Utah with a game that's explosiveness can only be rivaled by a filibuster marathon on CSPAN. Had a case of insomia lately? This aught to cure it.