The FWtCT gang picks the full slate of SEC games for week 9 of the college football season.

Share All sharing options for: FWtCT Picks the SEC - Week 9

As we move towards the home stretch of the college football season, things still stay pretty tight in our race to see who amongst the For Whom the Cowbell Tolls' staff can rise to the top of the SEC game picking mountain. Things are heating up, so let's take a look at where we stand today, who the guys are picking for this weekend, and who is #webelieve-in as State travels to Tuscaloosa to take on Alabama. 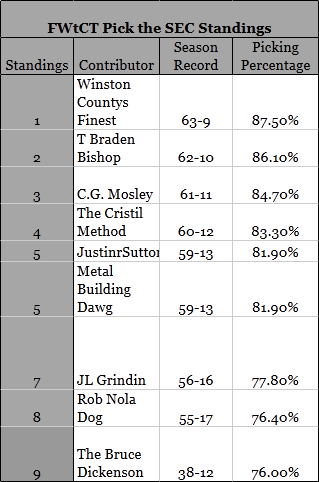 Robbie Faulk, aka WinstonCounty'sFinest, still stands atop the standings in the pick 'em challenge, but T Braden Bishop, fueled by what we believe is his wife picking for him, is making a serious run at Robbie's seat atop the throne. Just behind Braden is C.G. Mosley, who has had a really strong back half of the season picking games as well. C.G. is followed up by myself, then Justin and MBD in a dead heat in 5th, followed by JL, Rob, and the godfather The Bruce Dickinson bringing up the rear. Bruce is still working with a smaller amount of games to pick from as he started a few weeks in, so his ranking will fluctuate greater than the rest of ours, which could work to his advanatage if he does good this weekend. Speaking of this weekend, let's take a look at who everyone is taking on the 9th SEC Saturday. 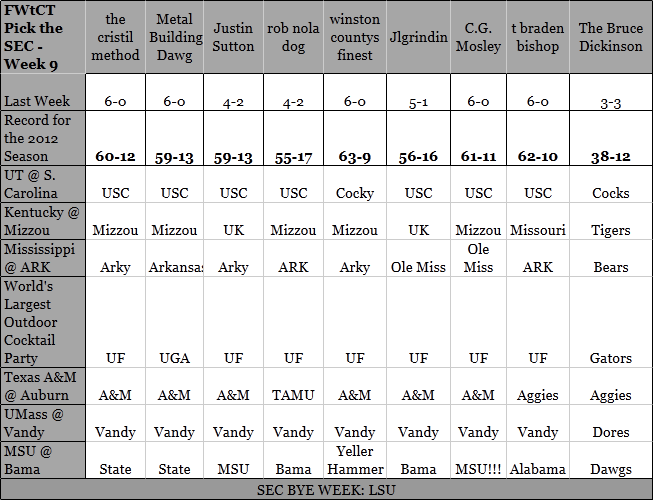 Well, that's it for our picks for this weekend. What are your picks?