The gang picks probably the best set of games so far in the SEC, as LSU and Florida clash this weekend, while Georgia and South Carolina battle in Columbia.

Share All sharing options for: FWtCT Picks the SEC - Week 6

We've waited for one of those vintage SEC bigtime matchup weekends, and we finally got it here in week 6. After a lackluster list of games in week 5, we, along with you guys and girls, are rewarded with a couple of outstanding matchups in the SEC this weekend in LSU at Florida and Georgia at South Carolina. These games could go either way, and both will help shape both the SEC East and West races as we approach the halfway mark in the season. But before we dive in to this week's games, let's take a look back at how everyone picked last week. 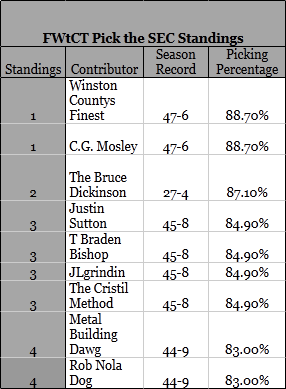 A perfect 8-0 record in week 5 has given C.G. Mosley that final push he needed to get to the top. Mosley joins Winstoncountysfinest at the top of our standings, as both are picking at a 88.7% clip. The godfather, aka The Bruce Dickinson, remains just behind them at 87.1%, while there is a pileup at the #3 spot between Justin, Braden, JL, and myself, while MBD and RND sit just behind in last place.

Week 5's games weren't the most exciting set of matchups, but they were enough to shake up our standings a bit. Metal Building Dawg take a bit of dive after a 5-3 week including picking UCF, Oklahoma State, and Michigan State. MDB, on his week 5 performance:

"Big Ten football doesn't even count. These standings are under protest."

Outside of the perfect weeks by C.G. Mosley and Justin Sutton and MDB's 5-3 week, everyone else picked right at 7-1 for the weekend, with most of us either picking UCF or Michigan State incorrectly. Now that we've got all of that out of the way, let's take a look at who everyone picked in week 6's games. 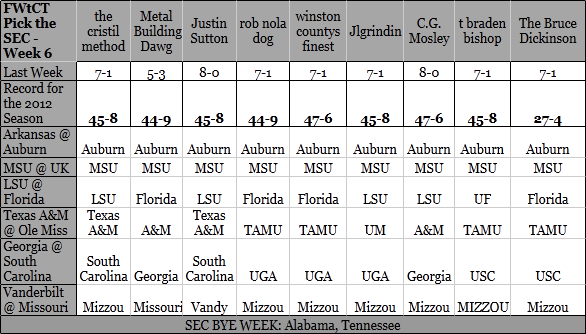 It looks like it is going to be another week where we all agree except on the big games. Everyone picked Auburn and Mississippi State, and all but JLgrindin picked Texas A&M over Ole Miss (it's okay, we support homerism here). Justin Sutton makes the decision to pick Vanderbilt over Missouri, for whatever reason... and then we find ourselves looking at the two big games on the weekend: LSU at Florida and Georgia at South Carolina. Now, I have to say that I'm not surprised by the split on the LSU-Florida game. LSU has not played its best so far this season, while Florida has played very well.

I am, however surprised, in how few people are picking South Carolina over Georgia. Both teams have the talent to win the SEC East, but both have some question marks as well. Georgia's defense was exposed a bit last week against Tennessee, while South Carolina was able to overcome a very slow start to beat Kentucky. Which team will come out on top? It looks like most of the group is going with Georgia on that one. No matter who wins, we ALL win this weekend with all of the great football on tv to watch.

Enjoy the weekend everyone! Who are you picking?