Sunday Funday: Reliving everything that was great about week 6 of the college football season

We thought week 6 would be the best week of college football this year so far, and we were right friends. Let's relive it.

Share All sharing options for: Sunday Funday: Reliving everything that was great about week 6 of the college football season

My goodness, I love college football. Is there anythingbetterwaitdon'tanswerthat, because the obvious answer is no. And although I am partial to SEC football, I am willing to find enjoyment in other forms, also known as Pac-12, B1G, ACC, and others. So while you're sitting around drinking your coffee this morning, let's go back and take a look, together, at what was so great about October 6, 2012 in the world of college football.

First and foremost, State gets a win

Sure it wasn't pretty, but I don't demand much to satisfy me. State gave me what I wanted ultimately, which was a victory, so how they went about it is a minor detail at this point. This team, despite whining about who they've played, has won the games they've had placed before them, and that's all you can ask of them. Tyler Russell is very quickly becoming one of my favorite players ever, and it feels so great to watch him become the player we all hoped he would be as a prized recruit out of Meridian way back several seasons ago. Russell, through 5 games, already has 10 TD passes. The MSU record for a full season is 16, set by Derrick Tate in 1996. At this pace, Tyler will break that record with 4 games left to go in the season. It has been that kind of year for us in Starkville, and we certainly hope the ride doesn't end anytime soon. 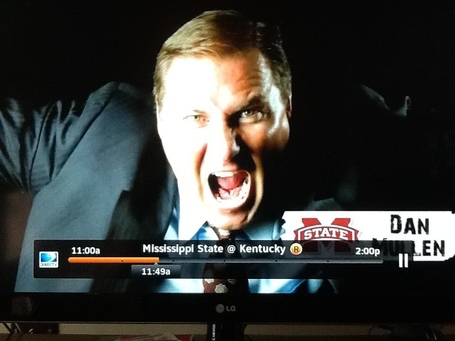 Upsets. Comebacks. POINTS. Saturday had it all. In Raleigh, North Carolina, someone forgot to tell Florida State that a football game involves two halves, and the Seminoles fell to the Wolfpack, 17-16. It's awful to say because they've really done nothing to me, but I love to see FSU lose. Don't we all though? We all love to see the upsets, and we got one thanks to Notorious TOB Saturday night.

Comebacks. The Wolfpack weren't the only one to deploy such a strategy Saturday. Despite Johnny Manziel basically doing this all night, Texas A&M was still able to come back and beat Ole Miss in Oxford, extending the Rebellious Black Bear's SEC losing streak one more game. Ole Miss had A&M on the ropes, and had themselves all but secured to move to 4-2 and even closer to amazing bowl eligibility in a season where noone thought they would win more than 4 all year. But it wasn't to be, as the Rebs felt the crush of collapse that only 2007 Orgeron can relate to.

POINTS. West Virginia left the points machine on yet again this week, although it produced only a meager 48 of them in their 48-45 win over Texas in Austin. This is officially the most fun team to watch this season, and not just because Geno Smith is electric. I love watching them because they seem to spawn playmakers out of nowhere, and each game like 15 guys catch a TD pass and I just sit there baffled at what Dana Holgorsen has created in Morgantown. The other reason why WVU's success is so much fun?

Someone commented on the tweet that they are the worst fanbase in sports. I disagree, sir. I would give anything to be in coal mining country the night (if) they win the national championship. No barcolounger will be safe, Alfred.

Both Sides of the SEC

The SEC gave us two great games Saturday. One was a defensive struggle, which ended in a team proving that they are back. The other was an unexpected blowout, which ended with a team proving they belong. I don't know who I should be more impressed by. For starters, Florida won a meaningful SEC game. Let that sink in. Not in several years have the Gators been this relevant or proved they belonged. Sure, LSU has some offensive problems to sort out, but don't take away from what the Gators proved Saturday. They proved that they are back at the top, and that Will Muschamp foundation building project is a bit ahead of schedule. LSU? Well, they miss Jarret Lee and Jordan Jefferson more than that thoughtheywouldokayI'mjustkidding. They miss Mathieu and the 2011 swagger, which they will now try to locate. But overall the game was fun. It was a defensive struggle, something the SEC has become known for. It had twists and turns, but it did lack that surprise Les Miles ending where he jumps out of a hat and snatches away your victory. Nevertheless, it was a fun one to watch in Gainesville.

As for things in Columbia between Georgia and South Carolina, well, in the words of George Takei: "Oh my." I said South Carolina just gave me the feeling that they weren't quite a complete team. Wrong. I said I didn't know if Connor Shaw was the quarterback everyone thought he was. WRONG. South Carolina proved a lot of things to a lot of people Saturday, mainly to themselves. They proved they belong, and after years of playing second fiddle to the Georgia's and Florida's, they could finally reign supreme in the East, and maybe even the country. I will tell you right now, I'm not sure there is a better defensive lineman in the country than Jadaveon Clowney. The guy is a Sophomore, and he played like a Senior All-American or NFL caliber player last niht. No wonder scouts are already drooling over him, he's the real deal. With a fully healthy Lattimore

Let's be honest, all of this football mess wouldn't be nearly as fun without us, the fans. We cheer, we do dumb things, we take our shirts off and do the Petey Pablo. In the euphoric moment of victory there's no limit to what we're capable of, as some of these fans proved yesterday.

Happiness. This man displays loads of it, in the most West Virginia form ever. This man looks like he would be up for just about anything, as indicated by his openness to wear overalls to a football game. Then after 15 loops of the GIF I become even happier watching this, as I discover (speculate) that granny in the back left is raising the roof. I love this game.

Not since last year's Arkansas fan have college football fans so unanimously declared a fan as the fan of the week. This gentlemen is in full celebration mode, and it's a celebration that we all get to enjoy, even the event staff guy. Was he drunk? Better question: does it really matter? The answer, of course, is no. He's gettin' his fan on, and through the power of the internet, we were all able to share in his state of NSFW happiness. 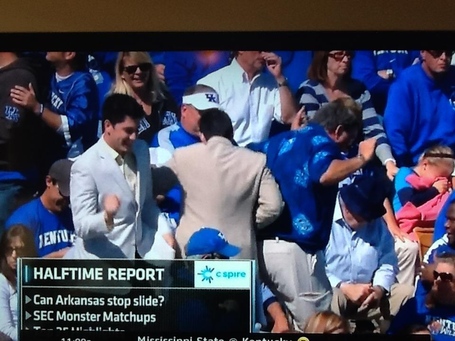 You can break their team, but you cannot break their spirits (because basketball season is fast approaching, and also BOURBON)

Other items of note from Saturday

Being taunted by Ole Miss university police - 'How does it feel to be lucky?' - officially qualifies as my welcome to the SEC moment

Laugh at them if you like, but one of the towel-holders blocking signals on sidelines today will be coaching Kentucky next year.

"Look, I know it says 'INSERT DISC TWO TO CONTINUE GEORGIA OFFENSE.' But I ain't got no dang disc two!" bellowed Mike Bobo into the phone.

I'm spent you guys. Let's do this again next week.