Your what to watch, your full Top 25 schedule of games, and more; all right here for your consumption, as we begin week 11 of the college football season.

Don't get me wrong - week 11 won't be week 10. But although there's no LSU vs. Alabama game of the century of the week this week, there is still a good set of games spread throughout the day on Saturday. The two matchups I plan on keeping my eye on are in the early afternoon slot, as Oregon State and Stanford get set to face off in Palo Alto, while Texas A&M takes their high flying "abomination of an offense" - Gary Danielson offense on the road to Tuscaloosa to face off against the #1 Tide. Outside of those two games, there are still a few solid matchups, and maybe even some hidden gems here and there. Let's take a look at the schedule for this weekend, but first, we can peek at my extremely lucky pick record from last weekend.

I didn't pick scores very well last week, but against the spread, I finally had a decent week. I, again, let me homerism blind me to picking MSU again, and Alabama's line with LSU should have been clearly high, but I bet it anyways. Enough with week 10 though, let's move on to week 11, and take a look at what is on tap for this weekend's action:

This weekend the gang are taking a step off of the beaten path and traveling out to San Diego (which stands for Saint Deago), to cover the San Diego State vs. Air Force game. Why would they be live from such a location, you ask? Because in honor of the upcoming Veteran's Day on Monday, College Gameday will come to you live from the flight deck of the USS San Diego. You read that correctly. I honestly am really excited to see this, if only for the potential that they let Corso operate a gun turret.

Who the crew picks this weekend won't be a major concern, at least for me, but what I will be interested to see is HOW Corso makes his pick. This year has seen its share of bold prediction maneuvers, from live cocks to live gators. Lee Corso is on a flight deck, ESPN, therefore anything short of 3 fighter pilots flying over in formation while he shoots automatic weapons into the air dressed like Rambo and screaming America will just be dissappointing. I'm sorry to set the bar that high. Also, this is the greatest picture ever (this week): 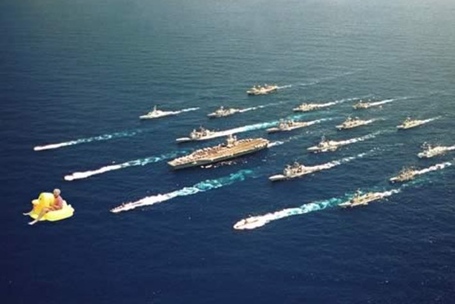 This game intrigues me, if only for the potential trap game that it presents for South Carolina. Although Arkansas isn't having the greatest of seasons, they still have enough offensive weapons to make it interesting. I do think South Carolina still wins, but Arkansas will give them a run for their money in the first half.

West Coast Game of the Day

This game presents one of the more interesting matchups of the day, especially on the west coast. You won't see the POINTSPLOSION in this game that you did in Oregon-USC, actually I would expect it to be quite the opposite. This one could have that SEC feel to it, turning into a grind it out type of game. Neither team has been flashy this year, but both continue to win, and this should be a fairly even matchup Saturday.

How I'd bet [hypothetically] - Stanford (-4) covers, in what I think will be a good, close game.

Prove your worth in Tuscaloosa

Texas A&M is 10 points away from being undefeated on the season. After how we all thought they would struggle so much in the SEC in their first season, A&M has proved pretty much everyone wrong, putting together an outstanding season so far. But there's difficult games and then there's Tuscaloosa, a place that has killed many dreams and hopeful seasons. Texas A&M has a high flying offense and all of the confidence in the world right now, but can they figure out that Alabama defense? Few have, and Texas A&M has struggled this season in losses against the two best defenses they have faced, Florida and LSU. A&M gives them a game in the first half, but Alabama is Alabama, and the talent and coaching difference shows in the second half.

How I'd bet [hypothetically] - Alabama (-13.5) covers, winning by at least two touchdowns.

Homer Game of the Week

Although I won't be picking this game this week for the reason of hopefully avoiding any further homer induced trainwrecks, I am intrigued as to how this game will turn out. I will be on hand Saturday night as State travels to Baton Rouge to take on the Tigers, who are themselves recovering from a Bama sized hangover after a narrow loss to the Tide last weekend. It's hard to tell if LSU will be hungover from the loss or fully zoned in and angry, ready to take out their next opponent, which just so happens to be us. I would just about put money on the latter being true, but I'm hopeful for a good game. State has a ton of things to correct from last week if they hope to be competitive Saturday night. Death Valley is not forgiving to mistakes, so State will have to find a way to start much better than they have the last two weeks.

This game is on the viewers guide mainly because at this point, why wouldn't you want to watch Oregon's offense? Especially against that Cal defense, this may end up being like watching your cousin play NCAA '13 on easy with an all-99 attribute team. Oregon is rolling, and I don't think anyone left on their schedule has what it would take to stop them. Their only opponent now is the BCS, and they will look to add "style point" (aka run up scores) in hopes that that can catapult them back into the #2 position by season's end. This one may be ugly.

How I'd bet [hypothetically] - Oregon (-28) covers, and covers quite easily.