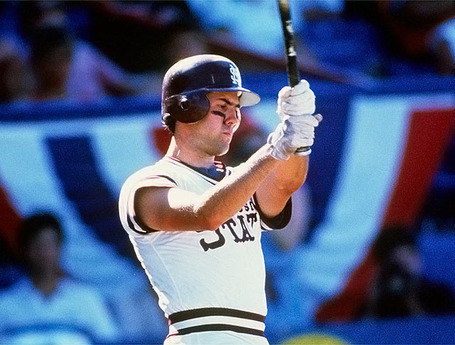 Will the thrill Clark (via i.cdn.turner.com)

we pick up where we left off yesterday afternoon, talking with Todd Littell about the upcoming season. so beings the final part of our preseason preview of Mississippi State baseball.

Q7: How will the changes to the Major League draft affect MSU baseball?

I think we are going to see a lot more high profile recruits go to college. I think Major League baseball is starting to gain respect more and more for college baseball, and I think they want their players to get at least started on their education sooner. I think you are also going to see a lot more players stay for four years than three. The signing deadline is now in July rather than August, and that helps us because if we do lose a player to the draft, we have an opportunity to replace that player, and now with the slotting system in place, we have an idea of what a player is going to be offered in terms of money.

Q8: What changes would you like to see in College Baseball?

Channeling my inner Ron Polk- I think there needs to be 20-25 full scholarships for baseball. That allows for 10-15 walk-ons with the current roster limits. I'd like to see the roster limits increased from 35 to 40. I would like to see Major League Baseball collaborate more with college baseball- basically, these coaches are producing guys that are going to be their players one day. It makes sense to me to help them develop at the start. Also, I'd like to see MLB Network televise at least one college baseball game a week. If they can televise the R.B.I. World Series, televising one college baseball game a week shouldn't kill them. The NCAA lets basketball teams play exhibition games- why not let college baseball teams play a three or four game exhibition slate one week before the season starts? I would love to see MSU play Delta State one weekend before the season starts, and I bet they would love to play us, too.

Man, I don't know about you, but I enjoyed all of that quality information from Todd. Here are the links for Part 1 and Part 2 of our talk with Todd.

Taking in to account all that Todd has told us, it sounds like State fans have alot to look forward to this season. Although the SEC is never easy to navigate in baseball, hopefully the deep stable of talent on the mound for State this year can help us push to the top half of the heap. To wrap up our preview, here are some links to help you get ready for the season.

That's all we have for you today folks. We hoped you've enjoyed this preview and that it was helpful in getting you ready for the upcoming season. I know I personally am excited for another year, and hope State can build off of last year's success to have an even better 2012 campaign.

Through the season, we encourage you to visit the site as we will bring you scores, game previews, recaps, and maybe even some more talks with Todd and other MSU baseball junkies throughout the year to keep you caught up on everything going on "between the chalk lines" at Dudy Noble Field.

As we wrap up, I'll just leave you with this video to help you get pumped up for Friday #HailState