Coach Cohen walks down the hallway calmly, headed to his preseason press conference

"Hey sally, how have you been lately? I hope well!"

/turns the corner where all beat writers are waiting for him 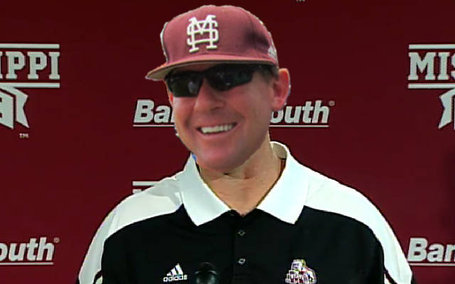 well guys, I'd love to answer your questions if you'd be so kind as to direct them to me

Beat writer in front row: Hey coach, good to be back here with ya. Um, I was wondering if you could tell us a little bit about what you expect out of the pitching staff this season?

well i'm glad you asked that, matt. I expect the staff to be deep, and I expect that almost every pitcher we have can go out and throw between 1 and 100 pitches any ball game.

Beat writer in front row: um, coach, could you further clarify that statement?

no. next question? you there, in the back from the bulldogs port radio? what is that, some sort of canine ship frequency channel or something?

Sports Radio Guy: um no sir actually it's Bulldog Sports Radio, a 24 hour Mississippi State sports radio station. Coach, my question was this: do you think opening the season with 17 home games can be considered a bit soft on your team, even with so many freshmen and sophomores?

did you just call me soft, son? NOONE CALLS THE COHEN SOFT

LET ME TELL YOU NANCIES SOMETHING: I OPENED UP WITH 17 HOME GAMES BECAUSE I WANTED TO TREAT THE FANS ALL NICE AND SUCH. DO YOU THINK I'M SCARED?

HELL NAW I AINT SCARED. ILL GO OUT RIGHT NOW AND SCHEDULE FLORIDA, ARKANSAS AND TEXAS ALL ON THE ROAD FOR 20 GAMES A PIECE, THATS HOW UN-SCARED I AM.

I KNOW OUR BOYS CAN TAKE ON ANY TEAM IN THE NATION ANYWHERE, I JUST SCHEDULED ALL THESE TEAMS AT HOME TO START THE SEASON FOR YOU FANS!!! 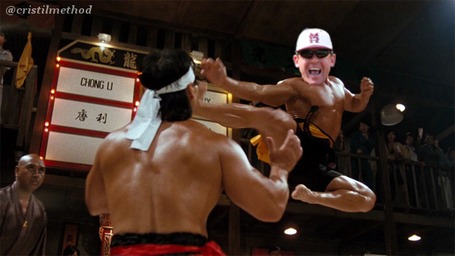 THATS THE PROBLEM GUYS, YOU AREN'T FANS. BACK IN MY DAYS THE BOYS WHO WROTE THE ARTICLES ALSO WORE THE TEAM COLORS. HELL BACK WHEN I PLAYED THE BEAT WRITER BOUGHT THE FIRST ROUND OF CELEBRATORY BEERS AFTER A BIG WIN

/looks at Bracky Brett in corner

Ummmm, not that I would've taken a free beer though, because that would've been wrong.

LOOK GUYS I'M JUST TRYING TO TELL YOU ONE THING: 17 HOME GAMES TO OPEN THE YEAR WAS FOR THE FANS.

THAT'S WHY I GET UP IN THE MORNING, THE FANS.

THAT'S WHY WE GOT THESE FANCY NEW SPEAKERS THIS YEAR SO THE ELDERLY FANS CAN HEAR BETTER.

SO LETS ALL GO OUT AND BEAT WRITE BLOG COACH CHEER AND DRINK OUR WAY THRU 17 STRAIGHT GAMES OF HOME COOKING!

/kicks over all beat writers